Back to the news list
Has Asia lost interest in North Sea oil?

In a year that has been destructive for the global oil and gas industry, there are now worrying signs that North Sea producers may be losing custom from one of their key export hubs. Asian customers have brought their North Sea crude imports in October 2020 to an almost 5-year low, with a mere 1.5 million barrels arriving throughout the entire month. Whether this is a pandemic-driven blip in demand or a long-term trend remains to be seen. Some 5 years ago, China was barely buying any cargoes from the North Sea, only the occasional Forties cargo once every quarter for further blending with really heavy African grades. On the back of multiple market perturbations, however, Chinese independent refiners have started to discover both flagship and niche grades from the Norwegian and UK continental shelf. Grane, Flotta, Balder, Ekofisk, Oseberg, Troll, Johan Sverdrup – they’ve all become a part of a vast crude pool. Around the same time, South Korean refiners started buying Norwegian condensates, availing themselves of the gasoline blending petchem feedstock possibilities of grades like Snohvit or Ormen Lange. 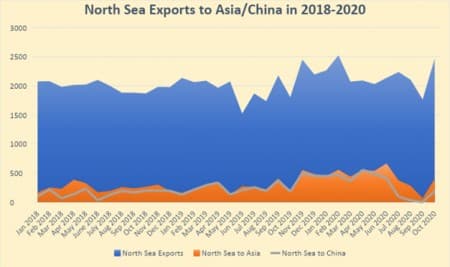 Forties has been the main North Sea stream going to Asia for the majority of the 2010s. Under the 2012 free-trade agreement between the European Union and South Korea, Forties exporters could export their barrels tax-free, eventually becoming the prime market outlet in Asia for the UK crude. Considering that Forties can be loaded onto VLCCs, always a benefit for Asian refiners and the fact that its higher light-ends yield provides a more attractive slate has gradually brought in the Chinese market for Forties exporters. In 2019 East Asian countries imported 74% of all Forties volumes, keeping the trend from previous years, with China taking in almost half of all the barrels, double the quantity of what South Korea has imported.

The emergence of Johan Sverdrup as one of the leading North Sea export streams has provided a graphic example of the benefits Asian refiners see in the crude and how it would gradually build a stable clientele. Sverdrup, roughly 28° API and 0.8% sulphur, was perceived as a direct competitor for the Russian Urals on the European market, especially with seaside refiners boasting a more sophisticated configuration. However, instead of heated competition for the already saturated European market, Sverdrup became a very Asia-focused phenomenon, boosted by its high fuel oil yields and relatively low sulphur content that can be easily blended into an IMO 2020-compliant mix. For instance, Johan Sverdrup ranked #2 on the list of crudes most imported by independent refineries during the spring months of 2020 – only ESPO saw more volumes marketed to the teapots. 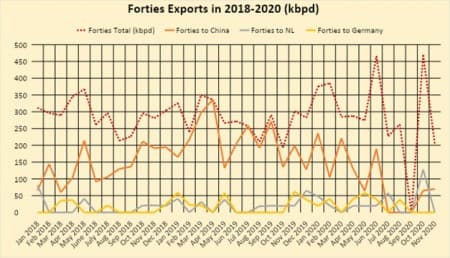 In many ways, the current demise of North Sea exports to Asia is a consequence of the Brent/Dubai EFS strengthening lately. The Brent/Dubai Exchange of Futures for Swaps (EFS) is a key marker of potential North Sea-to-East Asia arbitrage, gauging the strength of the Brent-priced markets compared to the Dubai-linked ones. If one is to look at the Brent-Dubai EFS trend historically, the average difference would hover somewhere around 2-3 USD per barrel – in some cases, it would move as high as 4-5 USD per barrel (in May 2018 or in September 2019 for example). However, when the Brent-Dubai EFS dropped to -5 USD per barrel in the last days of March 2020, the differential was in unknown territory. The EFS swung into a discount once again in September 2020, providing the financial basis of the North Sea oil flowing to the Asian Far East. 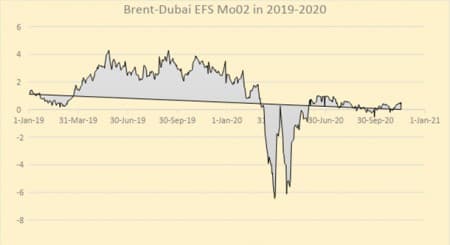 Since then, Brent has managed to strengthen itself to a more or less stable premium of 0.5-0.6 USD per barrel. No longer discounted and oftentimes jostled away by prompt West African cargoes, the really lucrative arbitrage opportunities were shut down, to the extent that some of Forties went into floating storage in and around Hound Point. At the same time, offshore storage of North Sea crudes off Chinese ports appears to have stopped. At the peak of the contango season, Chinese refiners were storing as much as 22 million barrels of Norwegian and UK crude – largely due to Chinese companies having the financial stature to withstand the financial exposure it created and because in April Dated Brent has slid to a $-10 per barrel discount to the front-month ICE Brent.

Confronted with weak Asian demand, North Sea crude producers were forced to market the volumes in Europe. Contrary to previous practice, 30% of North Sea production ended up in the United Kingdom, the highest level since November 2016 (for the sake of comparison, Norway’s Mongstad took in a mere 1.8 MMbbls compared to Britain’s 21.6 MMbbls). The aggregate 45.5 MMbbls of North Sea crude that was moved to European refiners amounts to 62% of total exports – despite the rate being the highest in years, it could have been even higher were it not for Johan Sverdrup, arguably the only North Sea crude that has managed to keep its international allure throughout 2020.