PetroVietnam Gas Joint Stock Corporation (PV GAS) has become one of the five businesses with market capitalization of over 10 billion USD in November. The rest four enterprises in the list are Vinhomes, Vingroup, Vietcombank, and Hoa Phat Group.

Statistics from the Ho Chi Minh City Stock Exchange (HoSE), the market capitalization of companies listed at the floor reached over 5.6 quadrillion VND (247.7 billion USD) in late October, up 9.1 percent over the previous month and accounting for 89 percent of the national GDP in 2020.

Particularly, the HoSE reported that it has seen 45 enterprises with market capitalization exceeding 1 billion USD, up 15 percent compared to that in September with some new names. 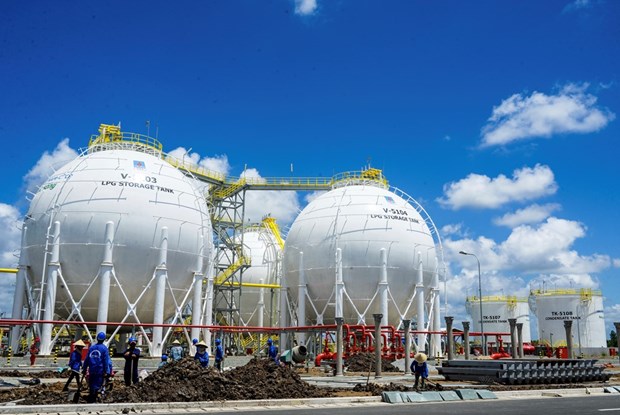 PetroVietnam Gas Joint Stock Corporation (PV GAS) has become one of the five businesses with market capitalisation of over 10 billion USD in November. (Photo: VNA)

With its stock price rising 48 percent since the beginning of this year, PV GAS has made a record in the price at 125,000 VND per share in October, pushing the firm’s market cap to 238.28 trillion VND (10.54 billion USD). Closing the November 8 session, the PV GAS share price reached 123,000 VND per share. Earlier this year, PV GAS has been named among the top 50 listed companies 2021 by Forbes Vietnam for the 9th consecutive year.

Forbes Vietnam said despite the COVID-19 pandemic, the companies included in the list have sought business opportunities, achieved good results and contributed to the country’s economic development. The firms have made the best performances on the Ho Chi Minh City Stock Exchange (HoSE) and the Hanoi Exchange (HNX).

Forbes Vietnam made the assessment based on such indicators as Compound Annual Growth Rate (CAGR), Return On Equity (ROE), Return On Capital (ROC) and Earning Per Share (EPS) during the 2016-2020 period. The companies have recorded combined post-tax profits of over 174.48 trillion VND (7.58 billion USD), a year-on-year increase of 26 percent.

Despite the recovery of petrol prices, profits of many businesses in the oil and gas sector dropped in the third quarter of this year due to impacts of the COVID-19 pandemic.

The Son My LNG port warehouse is one among a series of LNG power projects in the south central province of Binh Thuan, with an estimated total investment of 1.31 billion USD, and a capacity of 3.6 million tons a year in the first phase and up to 9 million tons in the next phase. The port will receive, process and supply LNG reprocessed as fuel for Son My 1 and Son My 2 power plants, expected to be put into operation by the end of 2025.

AES Corporation (AES) in Virginia State, the U.S, is named in the Fortune magazine’s (500 Fortune) list of 500 largest US companies and among the world’s leading power companies. AES has many experiences in building electrical and gas infrastructure. In Vietnam, AES has been operated successfully and effectively since 2010 and has invested in the Mong Duong 2 coal-fired thermal power plant with the capacity of 1150 MW in Quang Ninh Province. Currently, AES has also been approved by the Government to be the investor of Son My 2 Power Plant Project using LNG. AES Corporation has contributed the capital with PV GAS to establish Son My LNG Terminal Co.Ltd.