Back to the news list
US Backs Philippine Claims In South China Sea Anew; Sanctions Chinese Officials Behind SCS Island-Building 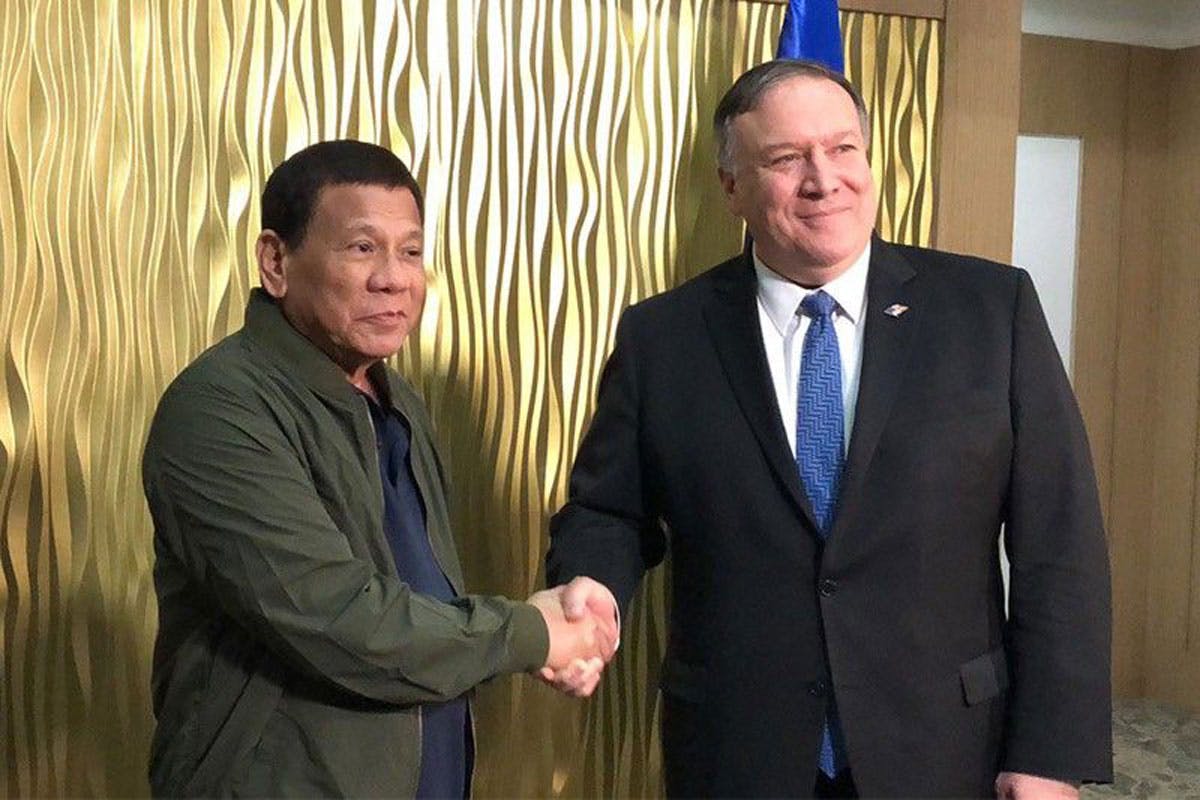 President Duterte and US Secretary of State Mike Pompeo shake hands before their closed-door meeting at Malacañang on Feb. 28, 2019. Pompeo was in the Philippines for a two-day visit. Malacañang photo

Chinese individuals responsible for the militarization of disputed areas in the South China Sea are now barred from travel to the US along with their immediate family members. State-owned Chinese enterprises have also been blacklisted.

The Trump administration announced on Wednesday, Aug. 26, that it is imposing sanctions on Chinese officials responsible for Beijing’s military build-up in the South China Sea.

The move is the latest salvo in the United States’ pressure campaign against China that has picked up steam ahead of November’s presidential election over a variety of contentious issues.

The State Department announced it had hit an unspecified number of Chinese officials and business executives responsible for the militarization of disputed South China Sea areas with travel bans. Immediate family members of those targeted may also be barred from travel to the US, the department said.

At the same time, the Commerce Department said it had added 24 state-owned Chinese enterprises, including subsidiaries of the China Communications Construction Company or CCCC, to its commercial blacklist for their roles in constructing artificial islands through dredging operations and other activities that cause major environmental damage and infringe on other nations’ claims.

In a statement, Secretary of State Mike Pompeo said the travel ban would apply to Chinese individuals “responsible for, or complicit in, either the large-scale reclamation, construction, or militarization of disputed outposts in the South China Sea, or (China’s) use of coercion against Southeast Asian claimants to inhibit their access to offshore resources.”

Last month, Pompeo accused China of “bullying” and announced that the US would not recognize nearly all of China’s maritime claims to areas in the South China Sea that are contested by its smaller neighbors, including Vietnam, the Philippines, Malaysia, Brunei and Taiwan. Beijing’s claims to these areas have been accompanied by increased military and commercial activities.

The Chinese government cannot be allowed to use CCCC or other state-owned businesses “as weapons to impose an expansionist agenda,” Pompeo said.

“The United States will act until we see Beijing discontinue its coercive behavior in the South China Sea, and we will continue to stand with allies and partners in resisting this destabilizing activity,” he added.

China on Thursday, Aug. 27, accused the US of violating international law by imposing sanctions on the officials and companies, but gave no indication of how it might retaliate.

The sanctions add to conflict over control of the sea, one of the world’s busiest shipping lanes. The US rejects China’s claim to virtually the entire waterway.

“The relevant US acts grossly interfere in China’s internal affairs, violate international law and relevant international norms, which are totally out of hegemonic logic and power politics,” Chinese foreign ministry spokesman Zhao Lijian said. “China will take firm measures to resolutely safeguard the legitimate rights and interests of its enterprises and individuals.”

“The relevant construction China carried out on its own territory is entirely within the scope of sovereignty and has nothing to do with militarization,” Zhao declared. “There is no reason for the US side to impose illegal sanctions on Chinese enterprises and individuals because of their participation in relevant domestic construction.”

Tensions in the South China Sea have been building as the US and others push back against Beijing’s moves to cement its control over the area.

US-China relations have declined to their lowest level in years amid disputes over trade, technology, Taiwan, Hong Kong and human rights.

China is currently holding live-fire military exercises in both the South and East China Seas. A Hong Kong newspaper reported Thursday that the military test-fired two missiles into the South China Sea, including one seen as specifically designed to attack a US aircraft carrier.

The DF-26B and DF-21D missiles fired Wednesday targeted an area between the southern island province of Hainan and the Paracel Islands, the South China Morning Post reported, citing unidentified sources close to the Chinese military.

The Ministry of Defense said the People’s Liberation Army conducted military exercises in the area, but gave no confirmation of missiles being fired or other details.

Support for the Philippines

In a briefing on the US decision to impose sanctions on Chinese individuals and corporate entities related to South China Sea occupation, a senior State Department official reiterated support for the Philippines’ claims in the area.

“We aligned ourselves strongly with the 2016 international arbitral tribunal ruling on the South China Sea case between China and the Philippines, and we stated last month that Beijing is pursuing unlawful maritime claims across the South China Sea,” the official said, referring to the landmark decision of the Permanent Court of Arbitration in The Hague.

“We made this clarification to strengthen our support for Southeast Asian coastal states in upholding their sovereign rights, and to reflect our deep concern over the increasingly brazen manner in which Beijing has deployed coercive tactics to inhibit other claimants’ access to offshore marine resources,” the official added.

The official also stated that China used these “platforms of coercion” in the South China Sea against its neighbors, expanding the reach of Beijing’s maritime militia and civilian law enforcement vessels, often backed by the Chinese military, to intimidate Southeast Asian claimants from accessing offshore resources.

“These actions are provocative and destabilizing,” the US official said.

“In the case of Mischief Reef and the Spratly Islands, which was determined by the 2016 arbitral tribunal ruling to be within the Philippines’ exclusive economic zone and on its continental shelf, Beijing’s development there – its building and militarization – is a violation of the Philippines’ sovereign rights and jurisdiction under the Law of the Sea Convention,” the official pointed out.

During the briefing, the official also mentioned that in 2009, CCCC was blacklisted by the World Bank for fraudulent bidding practices on a highway contract in the Philippines.

In Pompeo’s statement, it was underscored that CCCC led the destructive dredging of Beijing’s South China Sea outposts and is also one of the leading contractors used by China in its global “One Belt One Road” strategy.

“CCCC and its subsidiaries have engaged in corruption, predatory financing, environmental destruction, and other abuses across the world,” Pompeo said.

Asked for comment on the possibility of US-China tensions further escalating, Malacañang said President Duterte would always put the interest of the Philippines above all else.

“The President’s stand is clear: he will put the national interest of the Philippines first in view of a clash between the two superpowers,” presidential spokesman Harry Roque Jr. said in a briefing on Thursday from Malacañang.

Asked how the country would balance its interests amid the tension between the two countries, Roque reiterated the President’s “independent” foreign policy of “being friends to all, and enemy to no one.”

Roque was mum when asked if the Philippines would side with the US after Pompeo vowed that Washington would act against Beijing until it stops its coercive behavior in the South China Sea, and would continue to stand with allies and partners in resisting China’s destabilizing activities.

“You know, the move to enter the territory of another country is the decision of that sovereign nation.  So we will respect their decision, and there is no need for us to comment,” Roque said in Filipino.

Since he assumed power, Duterte has charted what he describes as an independent foreign policy that tilts toward China and Russia.  Last February, he moved to revoke the Visiting Forces Agreement between the Philippines and the US, saying it has been lopsided against the country.

However, Duterte suspended his order to terminate the agreement last June amid the coronavirus disease 2019 pandemic.  The Philippines and US are treaty allies, with the Mutual Defense Treaty signed in 1951.