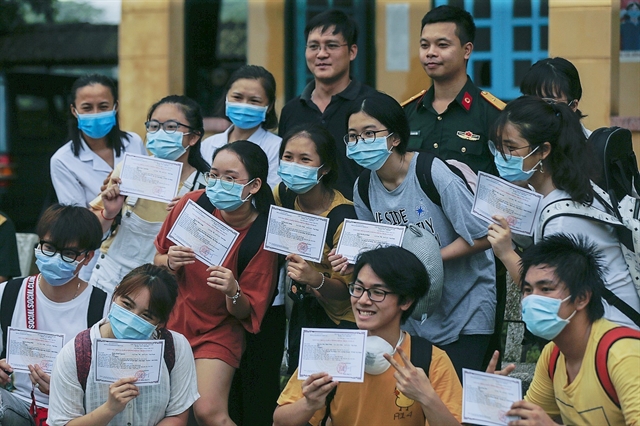 People take a group photo on May 23 after completing quarantine at a quarantine centre in northern Hòa Bình Province. — VNA/VNS Photo

HÀ NỘI — The US news website Politico has ranked Việt Nam the best performer worldwide in the fight against COVID-19.

The ranking is based on the COVID-19 impacts on public health and economic outcomes.

Politico has mapped the performance of 30 leading countries by plotting their health and economic outcomes and grouping them based on whether they have instituted light, moderate or severe restrictions.

Việt Nam is a front-runner regarding both public health and economic outcomes.

Việt Nam had recorded only approximately 300 cases out of a population of 95 million, without any deaths, Politico said.

The country’s economy is predicted to grow by 2.7 per cent in 2020, making it the overall best COVID-19 performer globally, it added.

As can be seen from the chart, Việt Nam stands at the furthest end as the nation with “better public outcome”, with Taiwan (China) coming close, followed by the Republic of Korea, New Zealand, Iceland, Argentina and Australia.

Regarding the “better economic outcomes”, Việt Nam also sits in a highest place, with Bangladesh, China, India, Indonesia coming next.

Việt Nam is also reported by Politico to have enacted light restrictions with most “businesses, offices and schools allowed to stay open, sometimes at reduced capacity. Large events have been restricted. Extra cleaning and record-keeping requirements may be in place for those operating businesses and other venues that attract crowds”.

Việt Nam has so far confirmed 325 COVID-19 infections, including 185 imported cases. With no new cases reported on May 25, the nation remained clear of transmissions of the disease for 39 consecutive days.