On January 12, in Thanh Hoa, the delegation led by the Minister of Industry and Trade Nguyen Hong Dien had a working session with NSRP. Attending the meeting were representatives of leaders of the Commission of State Capital Management at Enterprises, Thanh Hoa Provincial People’s Committee, Vietnam Oil and Gas Group and NSRP Management.​​​​​​​ 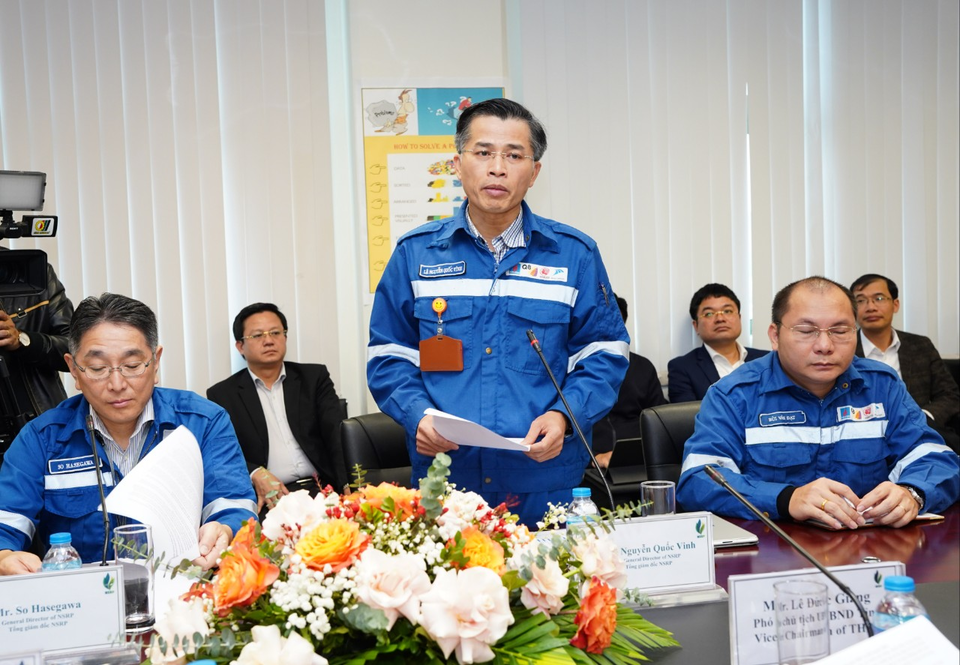 Accordingly, in the last 6 months of 2022, NSRP has made many improvements, improved reliability, and operated the refinery safely. The average capacity of 2022 reached 87.9%, corresponding to 33 crude oil shipments (8.9 million tons). The total volume of products supplied to the market was 7.4 million tons of products of all kinds, including 7.7 million m3 of petroleum for the domestic market.

Regarding the 2023 plan, NSRP will be conducting the first Turn around maintenance for the entire refinery in total of 55 days, starting from August 25, 2023. The 2023 capacity plan is set at 79.6% (decreased due to nearly 2 months of turnaround), corresponding to about 7.96 million tons of crude oil to be processed.

On behalf of NSRP Management, Mr. Vinh reaffirmed the Company’s commitment to complete repair works of the RFCC unit before January 15 and would resume normal operation of the refinery with 100% capacity or higher to compensate the shortfall product volume during the afore said maintenance period.

Speaking at the meeting, NSRP General Director Mr. So Hasegawa also pledged to ensure the supply of fuel products to the local market in the future, especially during the upcoming Lunar New Year.  In addition, NSRP would increase capacity of the refinery prior to the Turnaround Maintenance in August to compensate partially for the shortfall of product during such maintenance period. At the same time, the Company committed to ensure the Turnaround schedule in 55 days as announced. 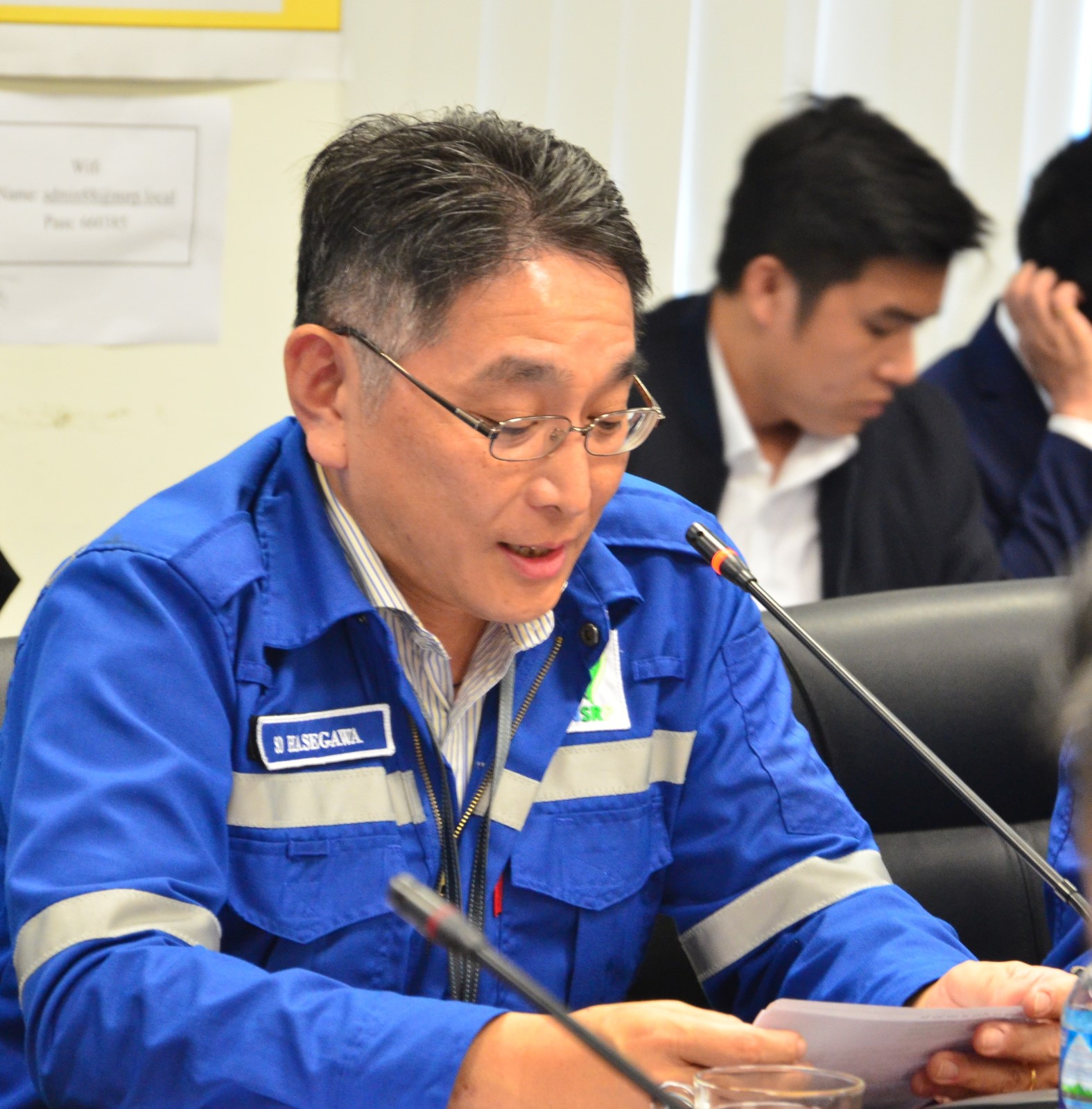 General Director Mr. So Hasegawa pledged to ensure the supply of fuel products to the local market in the future, especially during the upcoming Lunar New Year

In the concluding remark at the meeting, Minister Nguyen Hong Dien recognized and evaluated the efforts of the leaders and all employees of NSRP in maintaining and operating the refinery, ensuring the stable supply of petroleum products to the domestic market, thereby contributing to ensuring energy security for Vietnam.​​​​​​​

In addition, despite the difficulties and obstacles related to the price fluctuations of the crude oil market and the world petroleum market as well as the internal difficulties of the refinery in terms of operational problems and financial issues, NSRP had actively coordinated with the sponsors, especially the Vietnam Oil and Gas Group (PVN), to gradually solve the Company’s difficulties, and maintained stable operation of the refinery.

However, Minister Nguyen Hong Dien also frankly pointed out the limitations of NSRP in recent years. NSRP still had technical problems affecting the operation of the refinery, especially when these incidents caused the refinery to stop operating temporarily. Although such incidents did not cause any loss of life, they disrupted the operation of the refinery, affected the domestic petroleum supply, especially during the period of high fuel prices, and caused certain difficulties in the process of regulating the petroleum market by state management agencies. 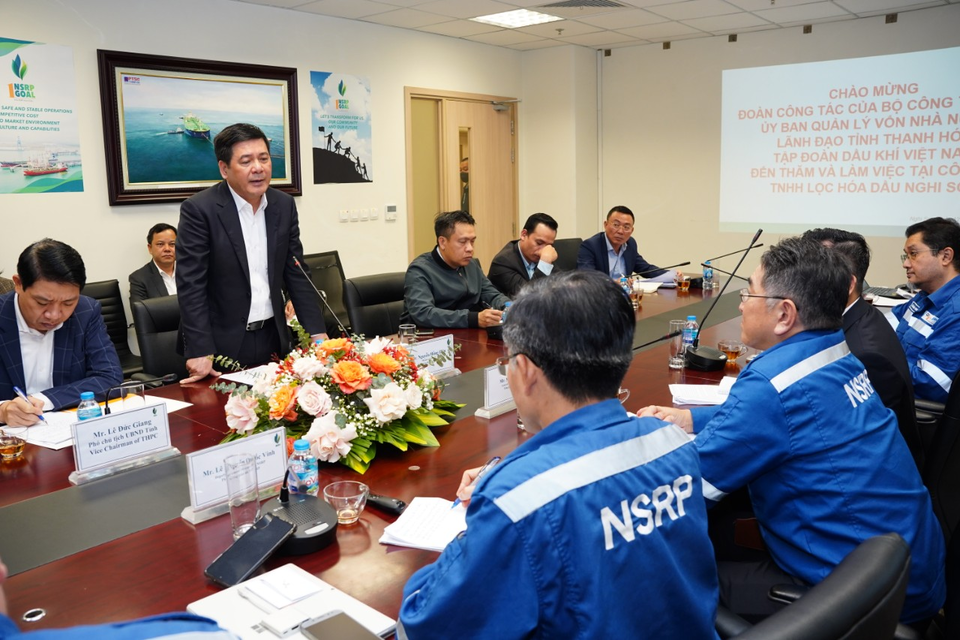 Therefore, the Minister suggested the following:

Firstly, at all costs, NSRP together with PVNDB must ensure supply to the market before, during, and after the Lunar New Year by resuming normal operation with full capacity after completion of repair works of technical issue detected in RFCC unit no later than January 15. Besides, it is critical for NSRP to mobilize the commercial reserves, including finished and semi-finished products, together with Binh Son Refinery, to ensure committed output delivered to key oil traders.

Second, the Minister emphasized that NSRP should make drastic changes in terms of not only the organizational structure but also finance, cost, and efficiency of production and business.

Third, after the periodic maintenance activities conducted in May, the Minister requested NSRP to urgently push the capacity of the refinery to the maximum to ensure stock volume of petroleum products to compensate for the shortfall caused during 55 days of the Turnaround period, including finished products and semi-finished products, by increasing storage capacity and even renting more storage spaces to ensure the largest inventory. Moreover, NSRP must stick to the pre-set 55 days of the Turnaround period and cannot exceed the above timeline.

Fourth, the Minister suggested that the Vietnam Oil and Gas Group, based on the plan assigned by the government and the MoIT, direct the two refineries to increase their maximum capacity and at the same time, to have a mechanism to negotiate, share benefits and risks with petroleum distributors to ensure product shortage in the turnaround period.

Finally, on the occasion of the Lunar New Year, Minister Nguyen Hong Dien sent his best wishes to all employees of NSRP. He wished everyone a new year filled with good health, success, happiness, and successfully completing all assigned tasks. 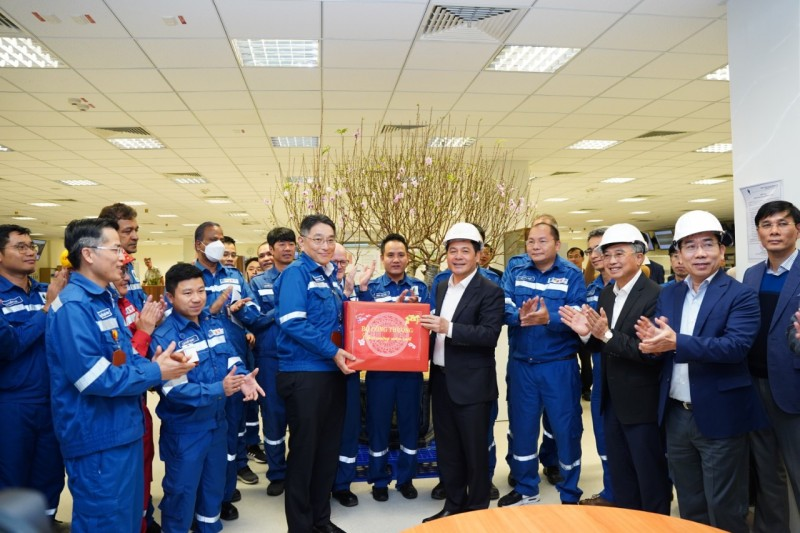 Earlier, Minister Nguyen Hong Dien and members of the delegation went for a site tour to check the progress of fixing the technical issue detected in RFCC unit and visit the loading area of the refinery.