On December 31st, 2020 at Vinpearl Hotel Thanh Hoa, Nghi Son Refinery and Petrochemical LLC. (NSRP) organized the Labor Conference of 2020, with the participation of delegates, guests and more than 100 delegates representing 1300 employees of the Company. Art performances in the beginning of the conference

In the opening speech of the conference, DGD. Mr. Vinh expressed his sincere gratitude to Oil and Gas Trade Union for strong and continuous support to NSRP Trade Union over the past 3 years. Under the guidance of Oil and Gas Trade Union, NSRP Trade Union activities were greatly enhanced year by year and significantly improved the employees’ livelihood that helped ensure their work-life balance by providing a training session on new laws and giving advices on relevant laws and policies. Simultaneously, he also thanked NSEZ Management Board and NSEZ Trade Union for tremendous support to the Company in compliance with legal regulations on enterprise and labor related issues. Last but not least, DGD Mr. Vinh congratulated NSRP Trade Union members on their strong development and achievements in year 2020, which created the harmony among the employees and the company, especially Mr. La Manh Truong – the Chairman and other leaders of the Trade Union who had realized all these activities. In addition, he said 2020 was a challenging year for all industries throughout the world, triggered by the COVID-19 pandemic and followed by oil market decline. However, in spite of these afore-said external factors, from operation perspective, NSRP had shown many improvements that were observed by achieved KPIs. NSRP had proven that the Company could improve and do much better in the upcoming years. He emphasized that ‘Solidarity’ should be the success factor in NSRP. If we tried to become the best refinery, we should harmonize all departments and divisions, improve the teamwork and also put the Company in first priority, to bring same value in work. All afore-mentioned matters were about building the company culture which he expected the Corporate Culture Development Team would take lead and become the pioneer to connect the Management and all employees to strengthen the spirit of ‘Solidarity’ – ONE TEAM, ONE MISSION, ONE VISION, ONE GOAL! 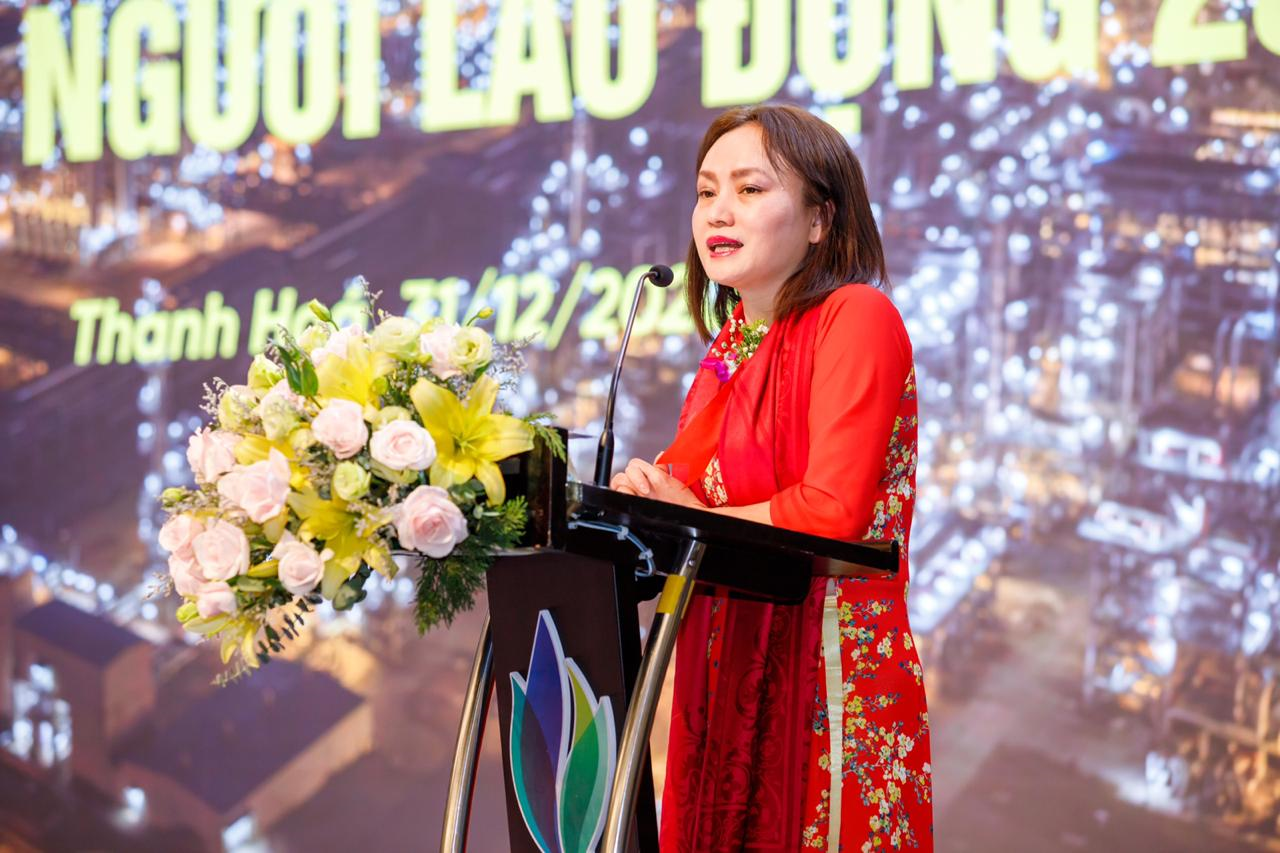 Speaking at the conference, Ms. Nghiem Thuy Lan – Chairwoman of Vietnam Oil and Gas Trade Union reaffirmed the important roles of NSRP in ensuring energy security for the Vietnamese economy and meeting the increasing domestic demand in petroleum and petrochemical products, serving the process of industrialization and modernization of the country.

In spite of facing several difficulties in the initial steps of organization and development, after 03 years under strong guidance and active support from the Vietnam Oil and Gas Trade Union, NSRP Trade Union had successfully completed the assigned tasks, fulfilling the role and functions of TU organizations, encouraging union members and workers to be energetic, enthusiastic, determinative in ensuring the Refinery safety, stability and producing high-quality products. NSRP Trade Union had also promptly cooperated with the Company to consult legal related matters for the Employees, improve the knowledge on Labor contract, working time, working category and others related matters for employees. Especially, in 2020, VN Oil & Gas Trade Union had recognized and rewarded 04 teams and 10 individuals of NSRP Trade Union with certificates of merit for outstanding contribution and achievement in the movement of hard-work and trade union development. Sports and cultural activities had been well organized to encourage and take care of NSRP employees practically. On behalf of Vietnam Oil and Gas Trade Union Leaders, Ms. Nghiem Thuy Lan warmly congratulated and acknowledged the achievements and important contributions of NSRP Trade Union over the past years.

Also at the conference, on behalf of NSRP Management, DGD Mr. Vinh presented report on the Company’s business status, financial information, the implementation of Company’s regulation & policies and the production orientation in 2021. 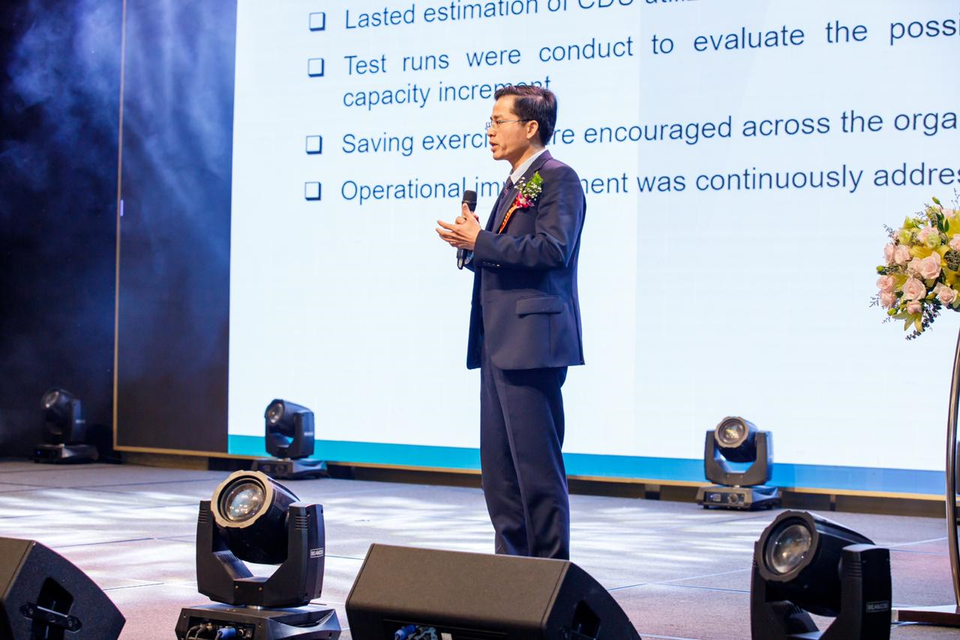 DGD Mr. Vinh reported the Company’s business results of 2020
and production orientation for 2021

Following Mr. Vinh’s report, on behalf of NSRP Trade Union, Mr. Le Dinh Bang – NSRP Standing Committee member presented the report on Trade Union’s activity over the past year as well as objectives and action plan for the year 2021. 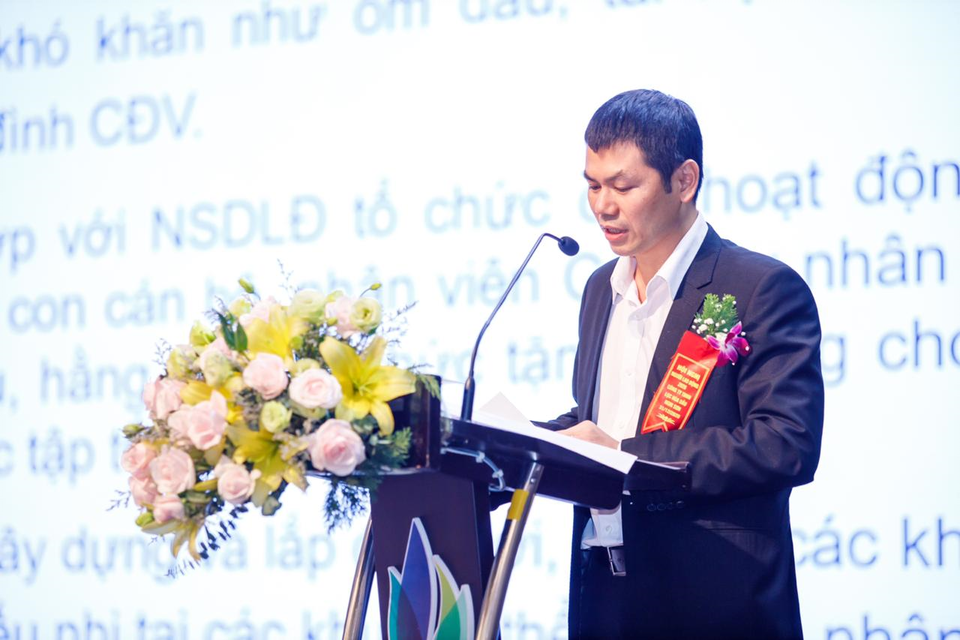 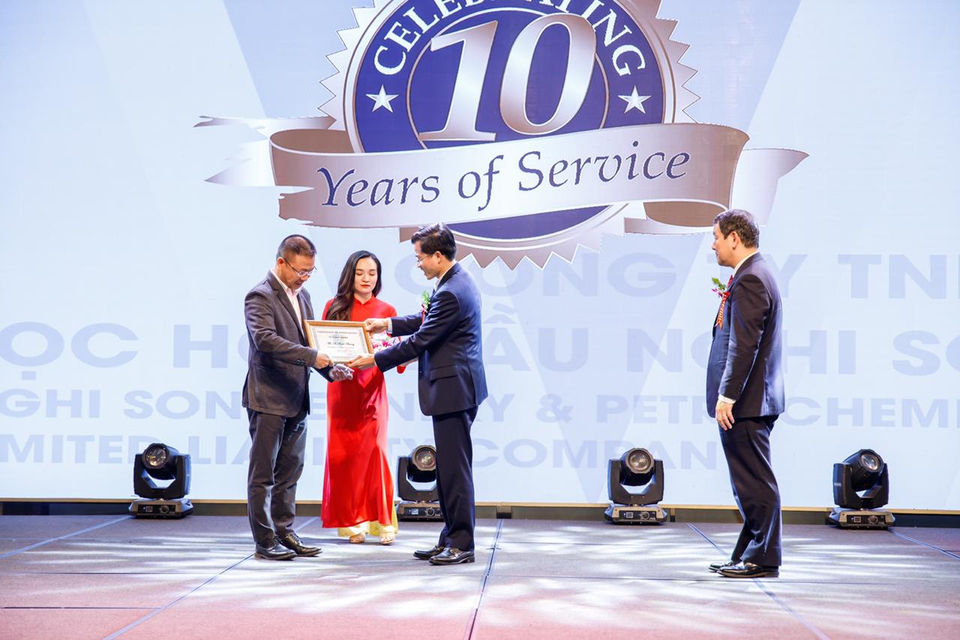 In addition, Ms. Nghiem Thuy Lan and Mr. La Manh Truong had given the recognition certificates to the winners of the NSRP TU’s contest of “Designing Logo and Slogan for NSRP Trade Union”. Furthermore, Mr. Ngo The Anh – NSEZ TU Acting Chairman and Mr. La Manh Truong – NSRP TU Chairman hosted a ceremony to commend and award the Certificates of Merit and bonuses to 10 groups and 19 individuals with outstanding achievements, making contributions to culture, sport, art and occupational safety and hygiene activities. 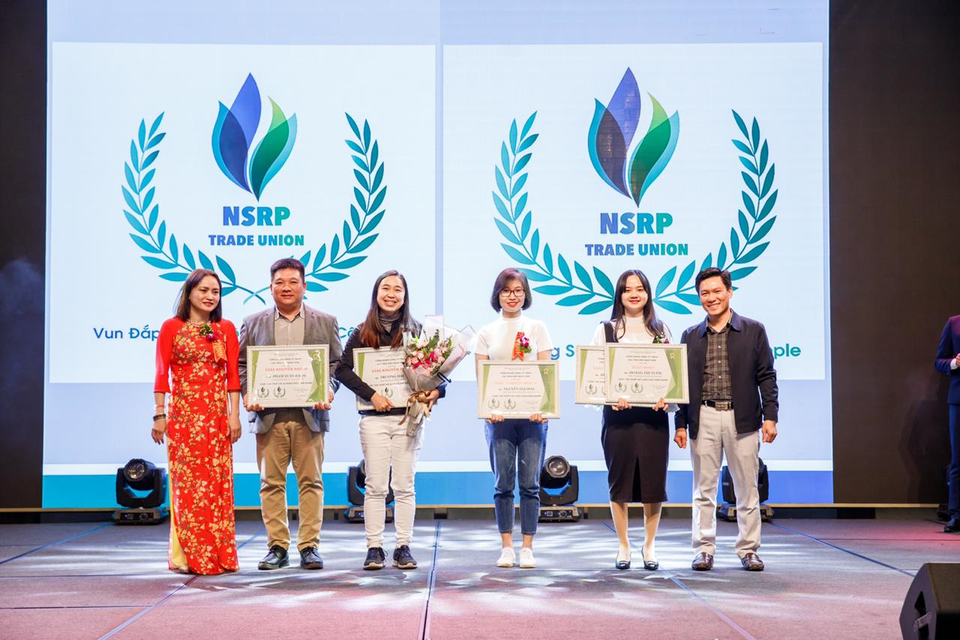 Ms. Nghiem Thuy Lan and Mr. La Manh Truong gave the recognition certificates to the winners of the NSRP TU’s contest of “Designing Logo and Slogan for NSRP Trade Union” 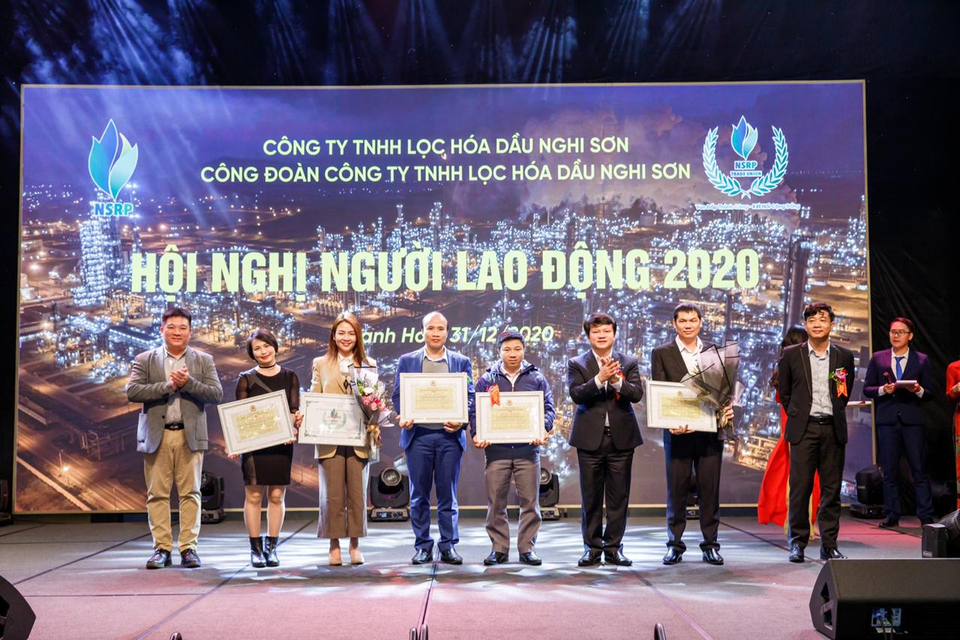 Also at the conference, representatives of NSRP Management and TU Executive Board had frankly acknowledged and answered all questions and concerns of representatives of the employees in order to build a friendly working environment; contribute to supplementing the achieved results, overcoming weaknesses in order to help the Company and the TU in a new phase fulfill the tasks set out in the new situation; strive to build the TU to be a strong union that strengthen the harmonious and positive relationship among the Company, the Union and all Employees.

Especially, at the conference, Mr. Truong – NSRP TU Chairman was very happy to announce the successful completion of the Collective Bargaining Agreement, an important written agreement between the employees and the employer on the working conditions that both parties have reached through collective bargaining and it would be signed in the beginning of year 2021.

After listening to the announcement of Conference’s Resolutions from Ms. Vu Minh Hai, 100% consent had been obtained. 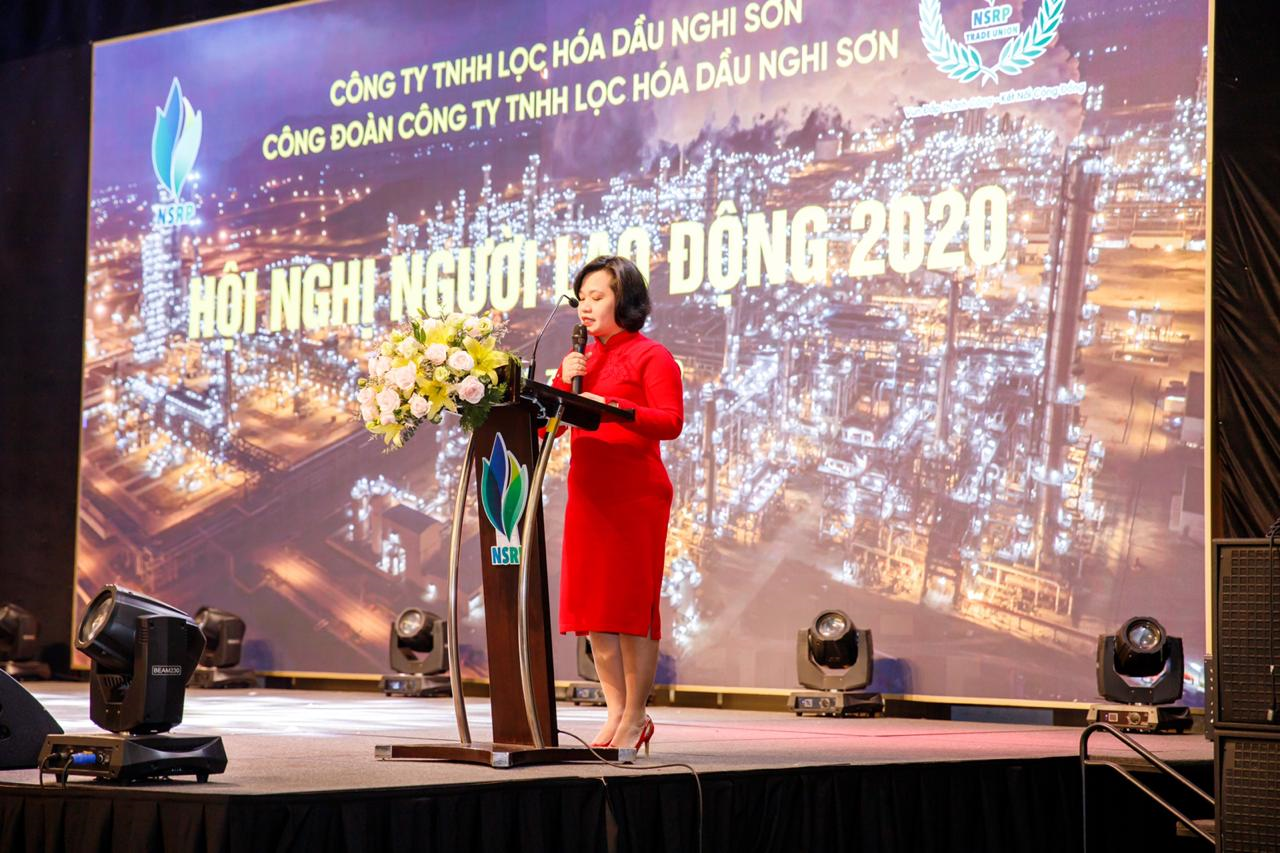 The NSRP’s 3rd NSRP Labor Conference took place successfully with the consensus of the Company’s employees, promoting the solidarity, bravery, wisdom, creativity and efforts that helped overcome difficulties and challenges to far achieve the planned targets in 2020 and at the same time create a firm momentum for the subsequent years thereby contributing to the stable and prosperous development of the Company.