China’s top offshore oil and gas producer CNOOC Ltd. is preparing to exit its operations in Britain, Canada and the United States, because of concerns in Beijing the assets could become subject to Western sanctions, industry sources said.

Ties between China and the West have long been strained by trade and human rights issues and the tension has grown following Russia’s invasion of Ukraine, which China has refused to condemn.

The United States said last week China could face consequences if it helped Russia to evade Western sanctions that have included financial measures that restrict Russia’s access to foreign currency and make it complicated to process international payments. Companies periodically carry out reviews of their portfolios, but the exit being prepared would take place less than a decade after state-owned CNOOC entered the three countries via a $15 billion acquisition of Canada’s Nexen, a deal that transformed the Chinese champion into a leading global producer. The assets, which include stakes in major fields in the North Sea, the Gulf of Mexico and large Canadian oil sand projects, produce around 220,000 barrels of oil equivalent per day (boed), Reuters calculations found.

Last month, Reuters reported CNOOC had hired Bank of America to prepare for the sale of its North Sea assets, which include a stake in one of the basin’s largest fields. CNOOC has launched a global portfolio review ahead of its planned public listing in the Shanghai stock exchange later this month that is aimed primarily at tapping alternative funding following the delisting of its U.S. shares last October, the sources said.

The delisting was part of a move by former U.S. President Donald Trump’s administration in 2020 that targeted several Chinese companies Washington said were owned or controlled by the Chinese military. China condemned the move.

CNOOC is also taking advantage of a rally in oil and gas prices, driven by Russia’s invasion of Ukraine on Feb. 24, and hopes to attract buyers as Western countries seek to develop domestic production to substitute Russian energy.

As it seeks to leave the West, CNOOC is looking to acquire new assets in Latin America and Africa, and also wants to prioritize the development of large, new prospects in Brazil, Guyana and Uganda, the sources said. CNOOC is seeking to sell “marginal and hard to manage” assets in Britain, Canada and the United States, a senior industry source told Reuters. All the sources spoke on condition of anonymity because of the sensitivity of the issue.

CNOOC has faced hurdles operating in the United States in particular, such as security clearances required by Washington for its Chinese executives to enter the country, the source added. “Assets like Gulf of Mexico deep-water are technologically challenging and CNOOC really needed to work with partners to learn, but company executives were not even allowed to visit the U.S. offices. It had been a pain all along these years and the Trump administration’s blacklisting of CNOOC made it worse,” said the source.

In its prospectus ahead of the initial public offering, CNOOC said it could face additional sanctions. “We cannot predict if the company or its affiliates and partners will be affected by U.S. sanctions in future, if policies change,” CNOOC said.

In the United States, CNOOC owns assets in the onshore Eagle Ford and Rockies shale basins as well as stakes in two large offshore fields in the Gulf of Mexico, Appomattox and Stampede. Its main Canadian assets oil sands projects are Long Lake and Hangingstone in Alberta Province. 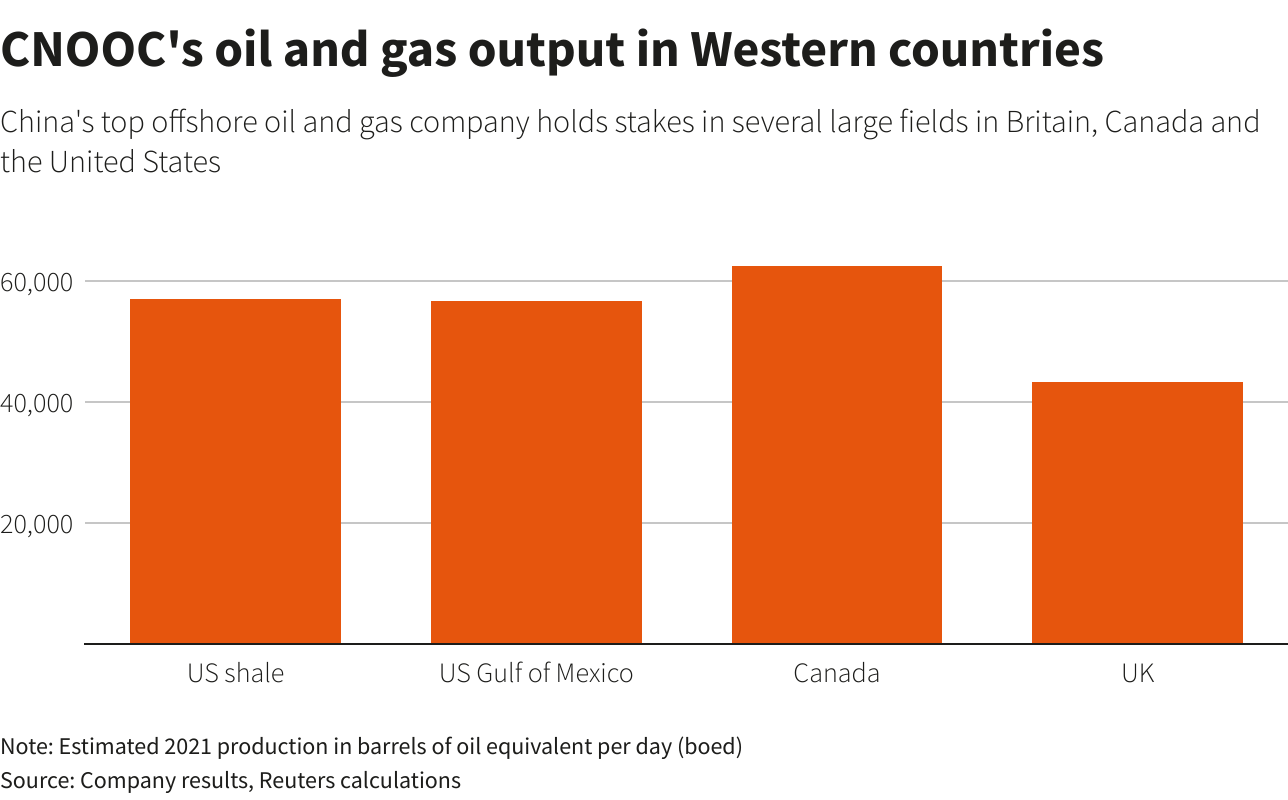