Back to the news list
Compliance with OPEC+ deal hit 102%: Kuwait’s Oil Minister 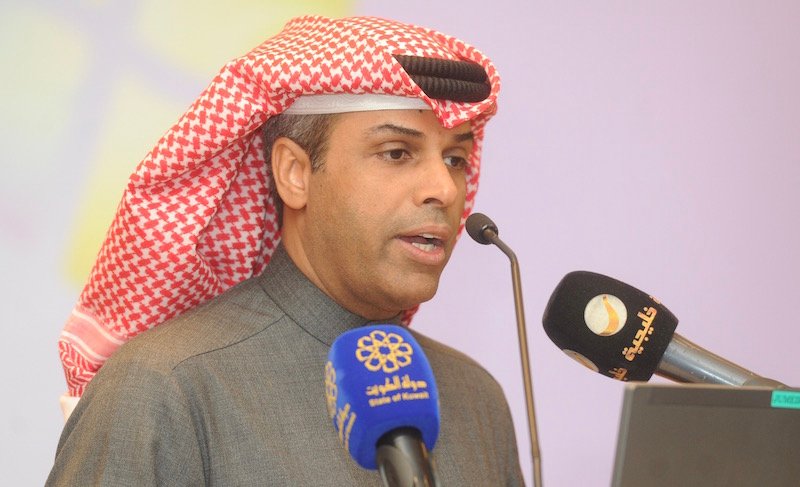 Kuwaiti Minister of Oil Dr Khaled Al-Fadhel said Monday the OPEC-non-OPEC partners committed themselves by 102 percent to the agreement on production cut last month. “This percentage, the highest since the agreement took force in last May, contributed to gradual reduction of the glut in oil inventory,” he said in a press release after leading Kuwait delegation to the 23rd Meeting of the Joint Ministerial Monitoring Committee (JMMC). The meeting was held online under the Chairmanship of Saudi Minister of Energy Prince Abdulaziz bin Salman and the Co-Chair Alexander Novak, the Russian energy minister.

Dr Fadhel, also minister of electricity and water, noted that recent data showed “unprecedented commitment” by the majority of partners thanks to the relentless efforts of the JMMC. “The meeting reviewed the data and reports on oil inventories which signal that the stocks took a downward slant,” he pointed out. “The State of Kuwait has played an important role as an active member of the JMMC in the activities of the committee since its inception in 2017,” he stressed.

Dr Fadhel called on the OPEC-non-OPEC producing countries to scale up efforts to reach even higher level of commitment to the deal on output cut which turned to be inevitable in the coming months due to the negative impacts of the outbreak of the novel coronavirus (COVID-19) on economic and trade activities worldwide. “Strict and continued commitment to the deal could help restore balance between supply and demand in the world oil market as early as possible,” he added.

The participants in the JMMC meeting paid tribute to His Highness the late Amir of Kuwait Sheikh Sabah AlAhmad Al-Jaber Al-Sabah for his support to the OPEC decisions since its foundation in September 1960. Prince Abdulaziz and OPEC Secretary-General Mohammad Sanusi Barkindo expressed sincere condolences to the government and people of Kuwait over the passing of His Highness Sheikh Sabah, recalling their personal relations with His Highness the late Amir.

The late Amir was highly praised for his excellent leadership and astute diplomacy, both nationally and around the world, the JMMC said in a statement. He was hailed as a loyal defender of OPEC and was considered, among those who knew him, as a man of great dignity, generosity and kindness, the statement added. The Committee reviewed the monthly report prepared by its Joint Technical Committee (JTC) and developments in the global oil market since its last meeting on September 17, 2020. The Committee also considered market prospects for 2021.

The Committee emphasized the ongoing positive contributions of the Declaration of Cooperation (DoC) in supporting a rebalancing of the global oil market in line with the historic decisions taken at the 10th (Extraordinary) OPEC and non-OPEC Ministerial Meeting on April 12, 2020 to adjust downwards overall crude oil production, and the unanimous decisions taken at the 179th Meeting of the OPEC Conference and the 11th OPEC and non-OPEC Ministerial Meeting on June 6, 2020.

The Committee reaffirmed the commitments of all participating countries to achieve full conformity and make up for any shortfalls under compensation plans presented to the Committee for an extended period through December 2020. In this manner, all participating countries were encouraged to increase their efforts to compensate for overproduced volumes in order to achieve the objective of market rebalancing and avoid undue delay in the process.

The Committee reviewed the crude oil production data for the month of September 2020 and welcomed the positive performance in the overall conformity level for participating OPEC and non-OPEC Countries, at 102 percent, which is considered the highest since May 2020 (excluding the voluntary adjustments in June 2020 by Saudi Arabia, Kuwait and the UAE).

Moreover, countries compensated in September 2020 a total of 249 tb/d to make up for previously overproduced volumes. The Committee applauded those DoC members who provided additional voluntary contributions in the month of September 2020, including compensation volumes. It has reiterated its call for those countries that are still underperforming to swiftly implement their commitments, including their compensation plan.

The JMMC underlined that underperformance is not only unfair to other performing countries, but it is also detrimental to oil market rebalancing. The Committee observed that the economic recovery has slowed due to the resurgence of COVID-19 cases in major economies, particularly in the Americas, Asia and Europe. The Committee reminded all participating countries of the necessity to be vigilant and proactive given the precarious market conditions and prospects.

The Committee thanked the JTC and the OPEC Secretariat for their contributions to the meeting. The next meetings of the JTC and the JMMC are scheduled for November 16 and November 17, 2020, respectively. The OPEC+ includes 13 members of the Organization of the Petroleum Exporting Countries (OPEC) and 10 non-OPEC countries. – KUNA