Japanese thermal coal receipts fell by 1.1mn t on the year or 12pc to 7.9mn t in August, according to provisional finance ministry data, pushing year-to-date imports further behind the curve of previous years.

January-August imports totaled 70mn t, the lowest eight-month intake in more than seven years and down from 73.4mn t at the same stage last year and the 2016-18 average of 74.1mn t.

August imports fell on the year even as power generation data suggest a recovery in fossil fuel-based output to almost the same level as last year. Only three of the 10 major utilities have published power data for August, but the available figures suggest that national generation from fossil fuels recovered to an average of 84.3GW last month, which would be only narrowly down from 85.6GW in August last year.

Fossil fuel-based generation fell by an average of 3.8GW on the year in January-July on slow demand during a mild winter and the impact of Covid-19 restrictions later on, but unseasonably hot conditions in August helped slow the downward trend. Daily mean temperatures in Tokyo were 1.5°C higher than the long-term average last month and 0.72°C higher than in August 2019.

But firmer power demand and comparatively firm fossil fuel-fired generation was not enough to counter a steep drop in Japanese demand for seaborne coal. Two factors probably weighing on demand last month are high utility stocks in the country and a greater preference for LNG, as gas prices continue to gain in competitiveness against coal for power.

Utility coal stocks rose to 9.9mn t as of the end of May — the latest data available — as a result of slower demand, which was up from 9.4mn t 12 months earlier and the highest since before April 2016.

But increasingly competitive LNG prices — or a forced increase in consumption in response to high stocks and an oversupply of contractual import volumes — may have been a bigger factor weighing on seaborne coal demand last month. Japanese LNG receipts were only 3pc lower on the year at 5.8mn t, compared with the 12pc decline in coal receipts.

Japan’s average LNG import costs fell by 45pc on the year in August to a 15-year low of just $5.62/mn Btu, driven by the collapse in oil prices, to which a majority of term LNG volumes are linked, this spring. This was down from $7.30/mn Btu in July and over $10/mn Btu 12 months earlier.

Average import costs for coal were down by only 32pc on the year at $72/t, the customs data show.

At these costs, the implied tax-inclusive generation cost for a 60pc gas plant and a 38pc coal plant would be $33.88/MWh and $29.36/MWh, respectively, according to Argus analysis. The implied $4.52/MWh cost advantage for coal-fired generation last month was down from nearly $19/MWh in August 2019, reflecting a greatly diminished incentive for utilities to run coal ahead of gas for power generation.

Australian coal accounted for around a half of the overall decline in Japanese imports last month.

A maximum of 5.3mn t of Australian coal was received, according to the customs data, although some of this total may include Colombian, South African or other origins of coal that are not differentiated in the provisional data. Japan imported 5.8mn t from Australia in August 2019.

Imports from Russia were flat on the year at around 1.4mn t, while receipts from Indonesia grew by 21pc to 990,000t. 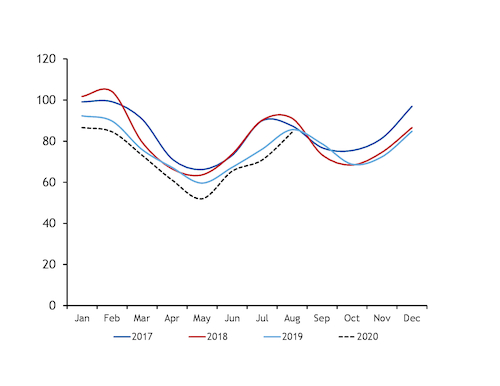 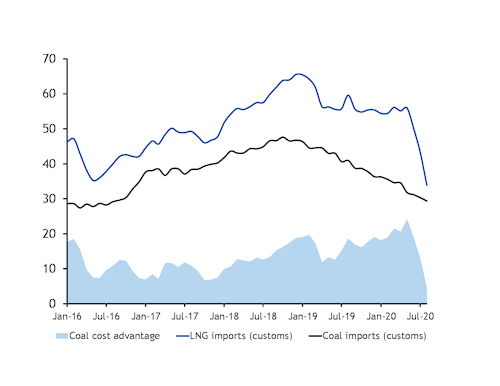