A quicker timeline comes amid a wider consolidation in Japan’s refining sector, which has been cutting capacity as it struggles to get business from a shrinking, ageing population that consumes less fuel because of more efficient vehicles.

Eneos, formerly JXTG, unveiled last year its long-term plan to transform with an assumption that domestic oil demand would halve by 2040, or fall 2% annually. It said in May 2020 it would spend 1.5 trillion yen ($14 billion) in three years to March 2023 to drive the change.

But “Japan’s oil demand may not return to the levels we had anticipated before the pandemic”, said Ota, who became president in June. “We need to tackle various reforms faster” to develop growth businesses such as renewable energy and streamline the refinery structure, he added.

“It would not only mean shutting refineries down, but also turning them into chemical refineries or energy platforms for electric power, hydrogen and others.”

To this end, Eneos’ refineries in a petrochemical complex in Kashima, east of Tokyo, and Mizushima, western Japan, among others have potential, Ota said.

Eneos operates 11 refineries with 1.93 million barrels per day (bpd) capacity. Their run rate in April-June plunged to 68%, lowest since 2010, as the pandemic slammed demand.

It has already decided to stop refining at its 115,000 bpd Osaka refinery, and teamed up with Mitsubishi Chemical to strengthen petrochemical refining at their plants in Kashima.

The end of refining at Eneos’ Osaka plant will cut Japan’s overall capacity to just over 3.4 million bpd, from 5.94 million bpd in the 1980s. 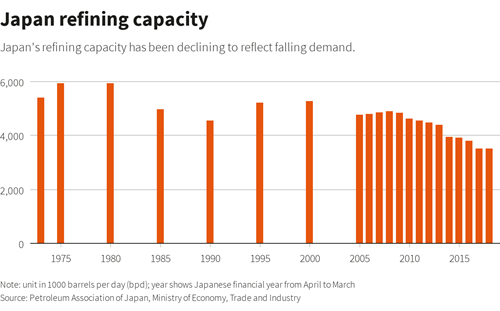 To cope with sliding demand, four of Japan’s biggest oil companies have merged into two, Eneos and Idemitsu Kosan (5019.T), in recent years.

Ota said further alliances would likely be with players in other industries such as electricity, gas and chemicals.

Eneos is still in talks with Vietnam National Petroleum Group (Petrolimex) PLX.HM to collaborate on refinery projects, and it eyes renewable energy projects in Australia to make CO2-free hydrogen, he said.