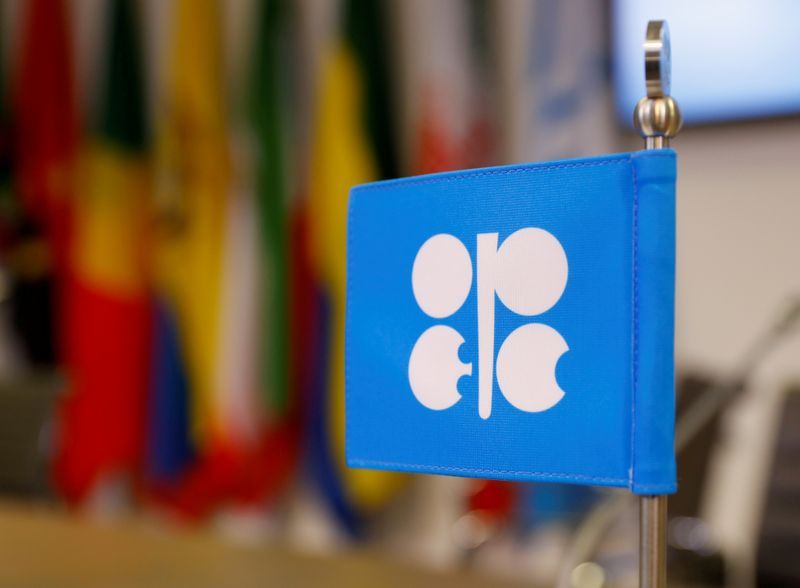 FILE PHOTO: The logo of the Organization of the Petroleum Exporting Countries (OPEC) is seen inside their headquarters in Vienna, Austria December 7, 2018. REUTERS/Leonhard Foeger/File Photo

Kuwait said on Thursday it would support any decision made by OPEC and its allies on future oil supply policy after OPEC and industry sources told Reuters some producers would prefer to pump more from January rather than extend output curbs.

De-facto OPEC leader Saudi Arabia and non-OPEC Russia are in favour of extending existing oil production cuts of around 7.7 million barrels per day (bpd) into next year. They want to maintain cuts because fuel demand worldwide remains depressed due to the coronavirus pandemic’s impact on population movement and economic activity.

Extending existing curbs would mark a change from the existing pact between the Organization of the Petroleum Exporting Countries (OPEC) and allies, a group known as OPEC+. The producers had previously agreed to raise output by 2 million bpd in January.

“Kuwait fully supports the joint OPEC+ efforts to restore balance to the oil market, and going forward we will also support whatever necessary joint decisions will be agreed to under the OPEC+ framework,” Kuwaiti Oil Minister Khaled al-Fadhel said in a report published by state news agency KUNA.

OPEC and industry sources briefed on the matter had earlier told Reuters that Kuwait, the United Arab Emirates and Iraq would like to find ways to increase supply by reviewing their output targets.

OPEC+ next meets in November to decide on production policy. Debate about targets and how they are calculated would complicate policy discussions on balancing supply with weak demand.

The UAE and Kuwait typically support Riyadh’s position, but both believed their output cut targets against their capacity were too deep to sustain into 2021, the sources said. Both have made big investments in boosting capacity.

“The countries are being suffocated with those cuts, it is very tough to continue with them next year too,” said one OPEC source.

The UAE is finding the cuts challenging because of its deals with international oil companies. When the country cuts, foreign oil companies have to contribute.

The UAE is cutting around 33% of its output potential, pumping 2.59 million bpd, down from around 3.9 million bpd in April before the deal, according to OPEC data.

The UAE had pumped more than its target in August but pledged to compensate for the rise by reducing its oil supply in the coming months.

Kuwait’s production cap is at 2.297 million bpd after it had boosted its output to around 3.1 million bpd before the deal, meaning it is cutting about 26% of its output capacity, the data shows.

Iraq, OPEC’s second largest producer, is required to cut about 850,000 bpd. Baghdad, which needs oil revenue to rebuild after years of war and sectarian violence, has previously raised the possibility in talks with OPEC+ of exemption from the reductions next year, sources said.

“Iraq will stay committed to OPEC+ cut deal and we will keep respecting our pledge, not only to cut production but also to compensate for the missing months until end year,” said a senior Iraqi oil official who attends OPEC meetings.

“But, and here we have a big but, when OPEC will meet again to discuss 2021 plans it will be difficult for Iraq keep cutting output and exports with the same agreed share in 2020 because we are suffering a financial crisis which threatens the possible collapse of the Iraqi economy,” said the official.

“All OPEC members must understand Iraq’s critical situation… when it comes to discuss a new cut extension deal.”

Iraq has failed to comply with its output targets but its compliance has been improving as it agreed to compensate for earlier overproduction by December.

“For the rollover to work, I think the baselines and quotas need to be looked at again… when the name of the game is to produce and maximize your gains,” one source from an OPEC producing country said.