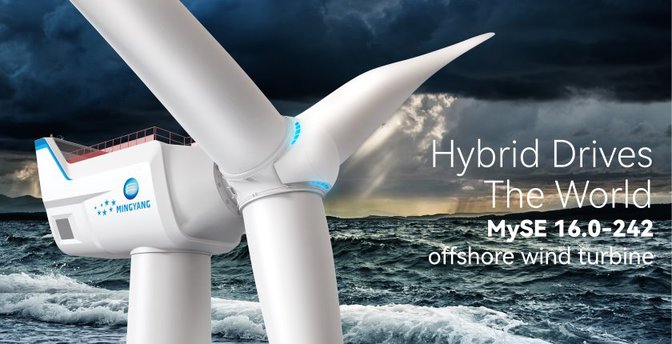 MingYang Smart Energy scheduled the market launch of its 16 MW offshore wind turbine for 2024. The Chinese company said the largest wind turbine under development in the world will be able to supply enough electricity for 20,000 households.

The rapid rise in demand for electricity for renewable sources and the decrease in costs for wind power technology prompted MingYang Smart Energy to design the world’s strongest and biggest wind turbine. The company headquartered in Zhongshan in China’s Guangdong province unveiled the plan to start the commercial production of the 16 MW system in 2024.

The model is called MySE 16.0-242. The designers implemented the hybrid drive transmission concept and opted for a compact solution, the company said. Offshore turbines are generally much larger than those in onshore wind power plants.

The 262-meter high wind turbine will be made to withstand typhoons, MingYang claims. It is envisaged to have a rotor with a 242-meter diameter, blades of 118 meters and a 4.6-hectare swept area.

Compared to coal-fired power generation, one MySE 16.0-242 can eliminate more than 1.6 million tonnes of CO2 emissions over the course of its designed 25-year lifespan, according to the announcement. It is the start of MingYang’s offshore portfolio of 15 MW or above.

The turbine manufacturer added it focuses its activities on Europe, the Americas and Asia-Pacific. The prototype is scheduled to be rolled out in 2022 and installed in the first half of the following year.

A recent study showed offshore wind costs are on the way to drop almost 49% by 2050, or even 64% in the best case scenario. Last year China installed more than half of the turbines in the segment on a global scale.

GE Renewable Energy has a 248-meter prototype of its Haliade-X model. It is designed for 12 MW to 14 MW and the height should reach 260 meters. Vestas is working on a 15 MW wind turbine, which Siemens Gamesa intends to match.