The oil markets have staged a dramatic rally since early November, with WTI breaking out of a range between the high $30’s and low $40’s for the first time since early this year. In this article, we will take a look at a couple of key drivers for this breakout, and see if it will continue on into the New Year.

What caused the rally?

Fundamentals for crude oil have been gradually improving over the last 6-months. The massive 550 mm supply overhang from early January has been gradually whittled down to just above 475 mm bbls. Now, that may sound like a lot but bear in mind that we go through about 18 mm barrels of oil per day, and with a consumption rate like that, 475 mm bbls accounts for just 26 days of supply. The difference between feast and famine is not always as big as one might think. If you can get all the oil you want, you are feasting. If there is a worry that some of your needs might go unmet, famine mentality sets in.  One of the outcomes of this inventory drawdown is a perception of tightening in the futures market for oil, with the later contracts moving into backwardation. Backwardation is a situation in which the current contracted price for a commodity is higher than prices in future months, and expresses short term supply concerns that drive prices higher. This is a positive sign for the market. 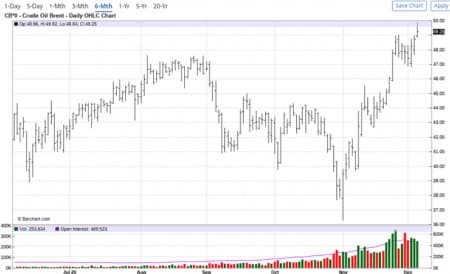 Something else that has helped to buoy prices is the level of restraint being applied to new drilling in U.S Shale plays. A consistent catch phase in the 2nd and 3rd quarter conference calls was “maintenance CAPEX” as being the expectation. Not growth, but rather a controlled decline. The rate of new drilling in shale plays speaks to this newfound discipline in oil company boardrooms. The graph below shows the effect of this discipline as the price of WTI rebounded strongly to the high $30’s before plateauing for a few months. Drilling has been very slow to pick up as operators have been able to maintain production declines with DUC withdrawals. Frac spreads had tripled from their lows by comparison.

I do write a lot about the impact of this lack of new drilling as it is where I have considerable expertise in my understanding of rock and liquid properties. That hasn’t kept me from missing the exit production rates for shale wells, as I thought the decline rates for legacy wells would be about double what they’ve been. According to the latest EIA DPR, we are going to exit 2020 with shale plays producing about 7,513 mm BOEPD, at least 1.5 mm BOEPD more than my most optimistic forecast from mid-year. If you use simple math, since March when production peaked at 9.3 mm BOEPD, we’ve lost 1.787 mm BOEPD, or 223K BOEPD per month.

There are now 323 rigs drilling for oil and gas, but there is no way this decline will be arrested until we hit a rig market somewhere in the 400’s. It’s not shown on the graph above, but in 2019 it took an average of 950 rigs to push us to the all-time shale production highs. So far we have 8-months of sub-400 rig market activity, and the likelihood is that we will reach a year before hitting that metric once again. Using EIA rig weighted averages, that means new production from drilling is missing 250K BOEPD that it can never recover. That has to translate into an accelerated decline rate at some point.

Two pivotal things have occurred to drive the energy market into its current frenzy. News in early November of the success rates for the various vaccines that had been promulgated by the WARP Speed program was the spark or inflection point that told the oil market that demand was going to come back as the world shakes off this malaise. So far that has counter-balanced the relatively gloomy news about infection rates surging and various places returning to lockdowns. My view is if this is a matter of a few weeks to maintain ICU beds then the market will largely shrug it off, keeping its eye on the longer-term goal of a post-virus world in which most of us have taken a vaccine.

Could the “inflection point” be here? That point where, when you look back upon it, it is obvious that everything changed. It sort of feels like it, but we need some time to verify the staying power of this move. After all, it’s been a six-year rolling train wreck since mid-2014 when oil was still above $100 bbl.

Back in September, I published an article in OilPrice where I discussed the foundational aspects of the start of a new commodity super-cycle. On a mathematical basis, the current down sine curve has another decade to go before reaching its maximum depth. Is the likely end of the pandemic next year enough to bring a premature bottom to the down stroke?

It’s impossible to say at this point. As I said we need some time to confirm this move. That said, Copper, one of the key industrial metals, has been making multi-year highs this year. 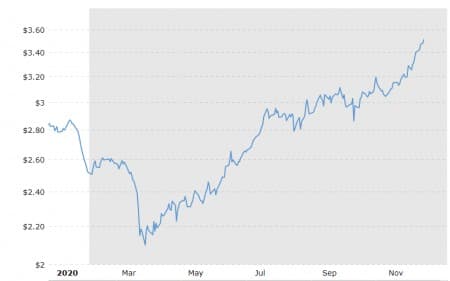 Another key metal used in making batteries is Lithium Carbonate. This year the price of a ton of this material has gone from $8,750 to over $14,000. Sharp rises in key industrial commodities are reflective of a perception of scarcity for that material.

Oil and gas are the energy sources for much of the mining economy upon which the production of these metals is based. As the perception of scarcity extends into the metals arena, so too should it affect the oil and gas markets.