The worsening demand picture for oil and derivatives finally squashed the $40 WTI price last week. There were just too many negatives hitting at the same time for the market to look down the road to a time when supplies must fall from lack of new drilling.  There were several principal drivers that caused WTI to lose its grip on the $40 level this week. First was a recent surge in corona virus infection rates globally which let us know that it’s not going to creep back into the slime from whence it came, and is going to be with us for a good while now. The one-year “over and done” narrative is officially dead. That has portents for oil demand next year that hadn’t had a lot of traction until this week, and the market took notice of this fact.

Then news this week that there would be some very uncomfortable side effects along with the vaccines that might come out of the various phase three trials now underway, put the “silver bullet” vaccine narrative “out with the cat.” The problem here is that this knowledge could put people off the idea of taking it, thus extending the progression of the virus through the global population.

Bad news comes in multiples these days, and the reality that no one is flying any place internationally was pushed to the fore by news from the International Airline Travel Association-IATA. A gloomy summary and forecast by the IATA put another nail in the bull story for crude this week. When you add to that the news that airlines are getting ready to dump  tens of thousands of highly paid employees on to the unemployment line, the oil market swooned anew. The future for long-haul flying is so bad that even the major airplane manufacturer in the U.S., Boeing is consolidating production of its long-haul international bird, the 787 Dreamliner into Charleston, South Carolina. The reality is that they are just not going need that many of them as international air travel has collapsed.

Source What’s not broken out in the graph above is international travel, down by some estimates as much as 96%.

I take myself as an example of how the world has changed. As a consultant, travel has been my reality. Last year I flew to Houston 15 times for meetings, Tulsa twice, Charlotte, N.C once, Kuala Lumpur, Malaysia once, and to Bangkok, Thailand twice, all for business. For vacation travel I flew to California once, Seattle (only to get on a cruise ship), and Maine once. I spent a ton of money traveling last year. Tens of thousands of dollars, and I virtually lived in airports.

This year I’ve boarded an airplane once to fly to Houston in January. The ticket cost about $400. That’s it. I would like to fly some, but worry about being stranded away from home if a place I was visiting declared some sort of emergency. So I don’t fly.

Corporate travel, the linch-pin of airline profits for decades is essentially non-existent.

Then, in-effect piling on, was the lack of any governmental relief related to Covid-19. This is tied up in partisan politics and key leaders, Nancy Pelosi-Speaker of the House of Representatives, and Steven Mnuchin, Secretary of the Treasury have met recently with no aid forthcoming. Perhaps news last week that President Trump and his wife have tested positive with a seemingly mild case of Covid, will move the government leaders to action.

There is a false narrative that things are almost hunky-dory in the economy, driven largely by stock prices, which have recently set all-time highs. The true fact is that many millions are wondering how they are going to pay the rent in October, as job furloughs are turning into permanent job losses. 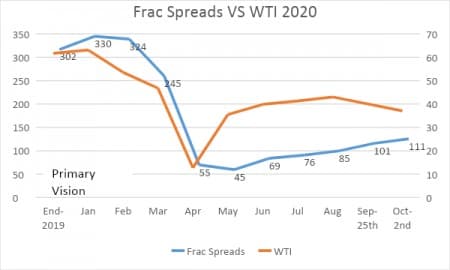 Finally we have refinery turnaround season upon us. Summer driving which has been bullish-a lot of us climbed into our cars and took trips, is over now. Refineries will be consuming less crude through the winter as they go into maintenance mode. 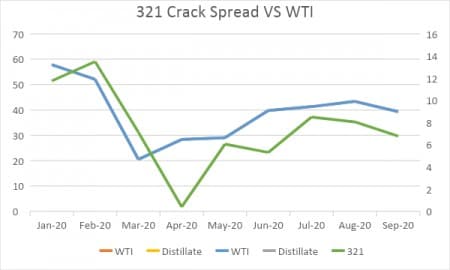