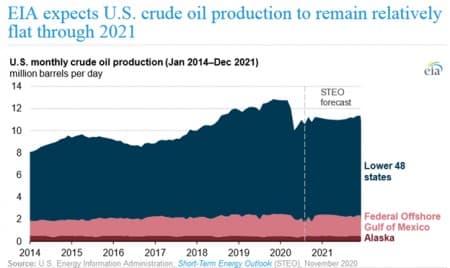 Chart of the week

News that a second vaccine was highly effective lifted global markets on Monday, adding optimism to the prospect that the end of the pandemic is within sight sometime next year. Oil prices rose again on Monday, but were down in early trading on Tuesday. WTI was trading just above $41 and Brent at about $43.50 per barrel. Despite vaccine hopes, the near-term remains grim in the western hemisphere with coronavirus cases continuing to rise.

OPEC+ sees deficit, eyeing 3-month extension. The extension of the OPEC+ production cut deal by three to six months will swing the oil market into a deficit  next year, the group believes. OPEC+ is considering four possible scenarios for 2021. The group is leaning towards a three-month extension, sources told Reuters.

Oil rally on the horizon. Multiple vaccines could set the stage for a rally next year. Meanwhile, even with the energy transition looming in the long run, oil and gas demand will rebound next year and beyond.

Natural gas prices sink on mild weather. Natural gas futures plunged by more than 8% on Monday on updated weather forecast that suggested the winter across the U.S. could be relatively mild. Shares for a long list of natural gas companies sank on the news.

Trump admin rushes Arctic sale. The Trump administration is hurrying to finalize a lease sale for the Arctic National Wildlife Refuge (ANWR) before Joe Biden takes over. The “call for nominations” was announced on Monday, which is followed by a 30-day comment period. Then there is another 30-day period before the lease sale can occur.

Trump admin rushes environmental rules. Agencies are hurrying to lock in some two dozen regulatory changes before the clock runs out on January 20. Bloomberg details the list of rules at Department of Interior, Energy and EPA.

Gulfport Energy files for bankruptcy. Gulfport Energy (NASDAQ: GPOR) filed for Chapter 11 bankruptcy protection on Friday. The Oklahoma-based company produced natural gas in Ohio and Oklahoma, but had taken on debt over the past decade for a series of acquisitions.

Ovintiv to shed Eagle Ford assets. Ovintiv (NYSE: OVV) is looking to sell off  its assets in the Eagle Ford shale in an effort to pay down some of the $7.14 billion in debt. Ovintiv bought the assets in 2014 from Freeport-McMoRan for $3.1 billion, but a source told Reuters that they may now only fetch $600 to $700 million.

Michigan could shut Line 5. Michigan Governor Gretchen Whitmer ended a lease for Enbridge’s (NYSE: ENB) Line 5 pipeline because of its “unreasonable risk” to the Great Lakes, and if it withstands legal challenges, the pipeline may need to shut down entirely by May. The pipeline carries oil and natural gas liquids from Alberta to refineries in Ontario, passing through Michigan.

Minnesota grants permit to Line 3. Enbridge (NYSE: ENB) received a key permit for its Line 3 replacement from Minnesota regulators. The approval moves the project closer to construction in the state.

UK to announce petrol car ban. British Prime Minister Boris Johnson is set to announce  a ban on gasoline and diesel car sales by 2030, bringing forward a previously announced date. The ban will be part of 10-point plan intended to slash emissions.

Saudi Aramco plans debt sale. Saudi Aramco (TADAWUL: 2222) said it would sell another round of debt to plug a deficit. Aramco issued $12 billion last year. Debt issuance from the Middle East has topped $100 billion this year.

Europe to overhaul carbon market. The European Commission is drafting a law to tighten the carbon market so that it aligns with the Green Deal. The move could cancel carbon permits, among other measures, in order to drive up carbon prices.

250 oil and gas bankruptcies since 2015. An updated counting from Haynes and Boone finds that an estimated 250 North American oil and gas companies have filed for bankruptcy since late 2014. When including the oilfield services sector, the total tops 500 bankruptcies.

Sempra announces FID for LNG in Mexico. Sempra Energy (NYSE: SRE) announced  its subsidiary ECA Liquefaction approved a final investment decision for the Energia Costa Azul LNG project in Baja Mexico. The project will be the first LNG terminal on the Pacific Coast of North America, and it could connect gas supplies in Texas and the U.S. mountain west to a pacific export route.