Back to the news list
Oil prices climb on stimulus hopes 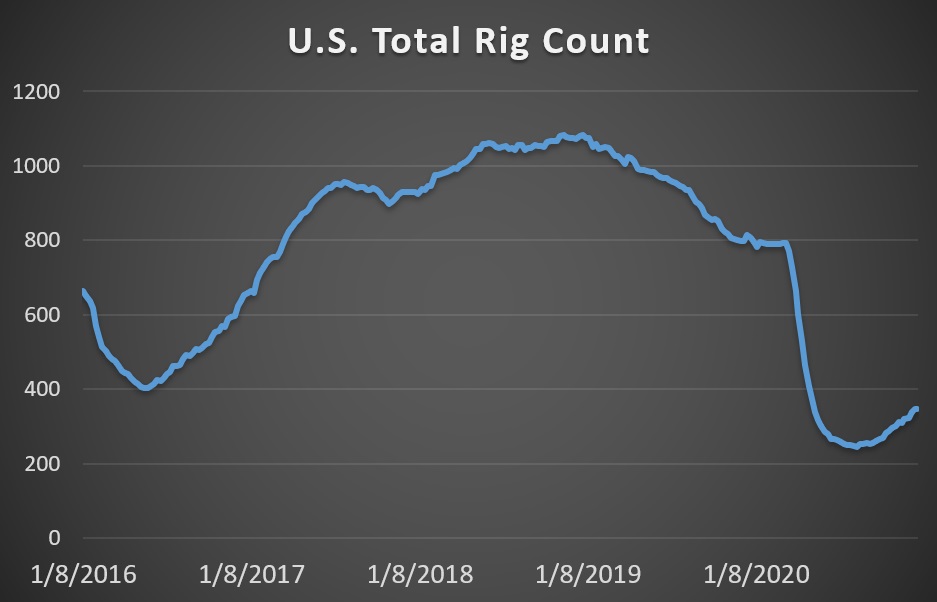 Chart of the week

–    Oil is once again trapped  between vaccine optimism and near-term pandemic pessimism.

–    Vaccinations began across the EU in recent days, but there are signs of an economic hit in Asia on an uptick in infections.

–    The front-end of the brent curve has moved back into contango, a sign of bearishness for the time being.

–    Gazprom (OTCPK: OGZPY) expects to produce 452 bcm of natural gas this year, which it said has been a “challenging” year. That would be a 10% decline in output.

–    Occidental Petroleum (NYSE: OXY) was picked by Bank of America as a top stock pick, with a Buy rating.

Oil has seesawed back and forth over the past week, sandwiched between very strong bullish and bearish forces on each side. Covid-19 is at its worst in many parts of the world, but vaccinations are picking up in earnest as well. Brent edged back above $51 per barrel after the house passed a major stimulus bill on Monday evening. “Markets feel very rangy into the New Year but should find support today from broader risk markets as stocks are soaring on the prospects of larger stimulus checks,” said Stephen Innes, chief global market strategist at Axi.

OPEC+ deal could be tweaked. The terms of the OPEC+ production pact could be revised if oil demand recovers next year faster than currently expected, Russian Deputy Prime Minister Alexander Novak, who is still in charge of coordinating Russia’s oil policy with OPEC, told Rossiya TV news channel in an interview on Monday.

Oil and gas write-downs largest in over a decade. Oil and gas companies in North America and Europe wrote down around $145 billion in assets in the first three quarters of 2020, the most since 2010. Prices are rebounding, but the write-downs also reflect long-term concerns. “They are coming to grips with the fact that demand for the product will decline, and the write-downs are a harbinger of that,” KPMG’s Regina Mayor told the WSJ.

Japan to phase out ICE vehicles. Japan said it would end  sales of gasoline vehicles by the mid-2030s, the latest major economy to chart a course away from the internal combustion engine.

Exxon’s emissions higher than thought. Internal planning documents reviewed by Bloomberg Green reveal detailed emissions projections for individual projects from ExxonMobil (NYSE: XOM). For instance, the Golden Pass LNG project would emit 3.1 million metric tons, and the liquefaction process would emit as much as a coal-fired power plant. Investors are growing increasingly concerned that carbon-intensive projects will be subjected to future regulation or taxation, and they are pressuring Exxon to detail more of their risk.

The worst-performing energy stocks of 2020. Schlumberger (NYSE: SLB), has rallied 23 percent in Q4. Nevertheless, the oilfield service provider has lost nearly half of its market valuation year to date, its shares are down 47 percent this year. Here are a few other of the worst-performers of the year.

Oil demand won’t recover until 2022. Global oil demand  will likely take another year or so to return to pre-pandemic levels—by late 2021 or early 2022, according to IHS Markit. Other analysts see something similar. A “full-fledged demand recovery is shaping up to be a 2022 story, with the 2021 exit rate getting close but not quite at pre-COVID levels,” Raymond James wrote in a note. Developing countries will face structural hurdles to vaccination programs, resulting in a drawn-out recovery.

BP well in Australia comes up empty. “BP Australia can confirm that no significant hydrocarbons have been found at the Ironbark exploration well in Western Australia,” the company said in an email to Reuters. The result is a disappointment for a project that hoped to supply the North West Shelf LNG plant.

Is the energy transition creating an investment bubble? NextEra (NYSE: NEE), the solar power firm, overtook ExxonMobil (NYSE: XOM) as the most valuable energy company in the United States, albeit just briefly. Everyone is talking about hydrogen. The energy transition narrative is hogging energy headlines. But what if it turns out to be one huge bubble?

Oil tanker market in for long recovery. Overcapacity for ships and a questionable outlook for demand means that the market for crude oil tankers remains difficult, according to consultancy Drewry.

Goldman: Exxon is oversold. ExxonMobil (NYSE: XOM), Chevron (NYSE: CVX), and ConocoPhillips (NYSE: COP) have returned an average of -36% this year, a dreadful result. “That said, the stock that appears most dislocated relative to negative revisions is XOM, with shares down 40% relative to our cash flow per share estimate down 19%,” Goldman Sachs wrote in a note. The investment bank recently upgraded Exxon to a Buy rating.