Prime Minister Pham Minh Chinh received President and Chief Executive Officer of Murphy Oil Corporation Roger Jenkins in Washington D.C on May 13 afternoon (US time) as part of his trip to the US. 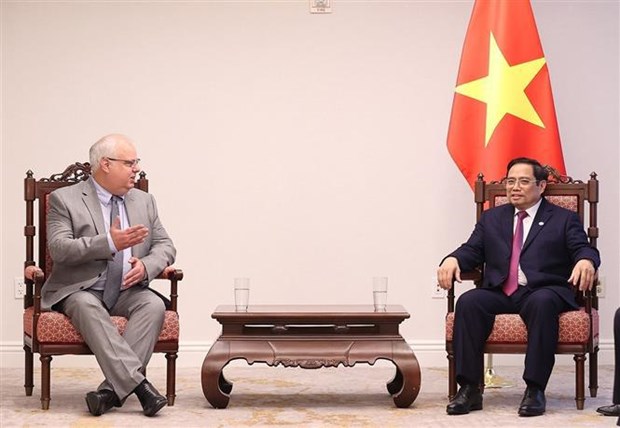 At the meeting with Roger, PM Chinh spoke highly of the cooperation and active participation of Murphy Oil in oil exploration activities in Vietnam over the past time. He welcomed the corporation’s plan to expand operation in Vietnam in the future. Roger said he highly appreciated the Vietnamese market and reported about Murphy Oil’s activities in Vietnam, particularly the progress of the Lac Da Vang oilfield project. He proposed support measures to help promote the progress of the project.

PM Chinh said he had issued directions relating to the project, and the Vietnam Oil and Gas Group (PetroVietnam or PVN) held many meetings with contractors and ministries, agencies to consider and deal with the project’s problems. He proposed the two sides to speed up the progress of related works.

PM Chinh said Murphy Oil needs to promptly continue to coordinate with the PVN and the PetroVietnam Exploration Production Corporation (PVEP) to handle related works. He stated that he had asked the Vietnamese ministries of Industry and Trade, and Planning and Investment to study proposals of the corporation and implement related tasks in order to speed up the progress of the Lac Da Vang project.

Murphy Oil has invested around 300 million USD in oil exploration in Vietnam and is managing oil fields in Be Cuu Long and Be Phu Khanh. It is cooperating with the PVEP to carry out the Lac Da Vang oilfield project with a total investment capital of 700 million USD. In the coming time, the corporation will continue oil exploration activities at oilfields under its management as committed with the Government of Vietnam.