Back to the news list
Quang Tri Province researches the first-ever offshore wind farm in the province. Experts say offshore wind power could be a good choice for Vietnam

The Vietnam Chamber of Commerce and Industry (VCCI) is ready to cooperate with the British Chamber of Commerce (Britcham) in supporting enterprises, especially those engaged in renewable energy and sustainable development to limit waste and environmental pollution, VCCI Chairman Pham Tan Cong said.

He made the statement at a working session with Britcham Vietnam on March 23 to discuss cooperation plans to assist businesses in certain sectors. Cong also gave a brief introduction of the Green Index Program (Green Index) led by the VCCI’s Legal Department. He welcomed BritCham’s participation as a leading partner. 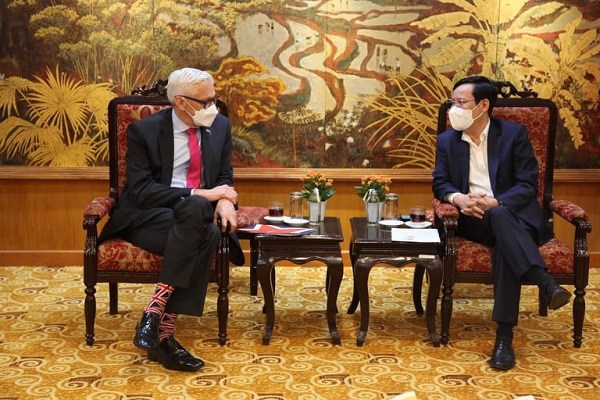 At the event. (Photo: diendandoanhnghiep.vn)

The VCCI Chairman lauded the good relationship and positive results that the two sides have achieved in creating a favorable environment for firms doing business in Vietnam.

Christopher Jeffery, Chairman of BritCham Vietnam, said the UK looks forward to expanding cooperation with the VCCI to promote trade among the two countries’ business communities in the fields of pharmaceuticals, health care, tourism, renewable energy and sustainable development.

Jeffery said that a new trade envoy will be appointed and is expected to visit Vietnam in April. He will work with the Vietnamese Government, relevant agencies and the VCCI Chairman to further improve the trade relationship between the two countries, creating a more favorable business environment for their enterprises.

At the meeting, Denzel Eades, a member of BritCham’s Board of Directors, suggested setting up an international Master of Business Administration (MBA) training program which meets international standards in Vietnam and is willing to coordinate and support the VCCI in the implementation.