Samsung Vietnam CEO affirmed that Thanh Hoa had favorable traffic conditions with improved business and investment environment, and in the coming time, Samsung would support the province to attract investment.

The delegation of the Samsung Vietnam Complex led by Mr. Choi Joo Ho had a meeting with Thanh Hoa province in order to discuss the cooperation between the two sides in the coming time.

At the meeting, Mr. Choi Joo Ho, CEO of Samsung Vietnam Complex thanked the warm welcome of the leaders of Thanh Hoa and expressed his impression of the province’s potentials and strengths; infrastructure, socio-economic development, especially in the context of the COVID-19 epidemic.

Mr. Choi Joo Ho said that in Vietnam, Samsung had been focusing on investment in three provinces and cities including Bac Ninh, Thai Nguyen and Ho Chi Minh City with a total registered investment capital of USD 17.5 billion.

At the meeting, leaders of Thanh Hoa province introduced the potentials, strengths and breakthroughs in socio-economic development, improvement of the investment and business environment of the locality in recent years. 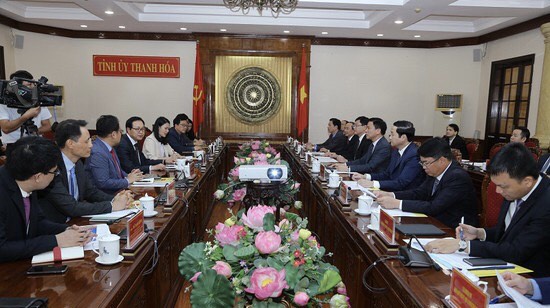 Accordingly, Thanh Hoa is a province possessing many potentials and advantages, having a strategic location, convenient transportation route, and abundant natural resources. Currently, the province has a population of 3.64 million people, ranking third in the country after Hanoi and Ho Chi Minh City. In which, the labor force in the golden age is over 2.5 million people; relatively high educational level and expertise, suitable for many fields of science – technology, production and business.

In recent years, Thanh Hoa has been making efforts to improve the investment environment. And, in order to attract business investment, this locality has applied incentives mechanisms and policies, investment support in accordance with the principle that investors enjoy the highest incentives in terms of interests and the lowest level of obligations in the regulatory framework. 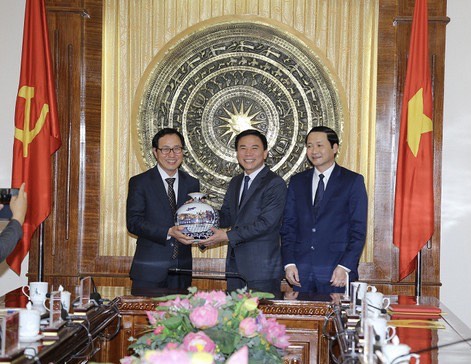 Learder of Thanh Hoa province give gifts to the delegation

Speaking at the meeting, Mr. Do Trong Hung, Secretary of Thanh Hoa Provincial Party Committee affirmed: “Thanh Hoa has favorable conditions in terms of population, infrastructure, convenient transportation route, abundant natural resources, favorable investment environment. Especially recently, the Politburo has issued Resolution No. 58-NQ/TW on the construction and development of Thanh Hoa province until 2030, with a vision to 2045. Accordingly, Thanh Hoa is identified as one of the growing poles and development quadrilateral of the Northern region.

The Secretary of THPC hoped that in its development strategy, Samsung would pay special attention to Thanh Hoa; create conditions for Thanh Hoa to attract businesses’ investment. The province hoped the delegation of Samsung Vietnam Complex and Mr. Choi Joo Ho would consider Thanh Hoa as a red pinned address, the upcoming destination of Samsung.