Saudi Arabia has become one of the Middle East and North Africa (MENA) region’s leaders in the race to use renewable energy, according to a new study. 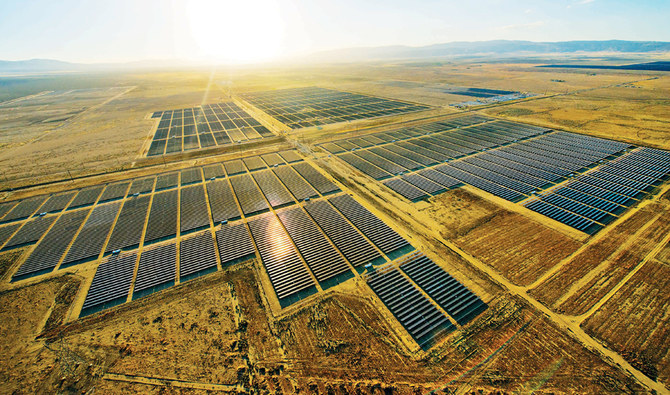 The value of solar-power projects in the MENA region is estimated at between $5 billion and $7.5 billion. By 2024, that figure is expected to approach $15 billion to $20 billion.

The Solar Outlook Report 2020 was launched at the Solar Forum of the World Future Energy Summit, a highlight of this year’s Abu Dhabi Sustainability Week (Jan. 11-18).
The report, prepared by Middle East Solar Industry Association (MESIA), the largest regional body of its kind, said Saudi Arabia and Oman have joined the UAE, Morocco and Egypt as leaders in the renewables race.
“Saudi Arabia is now in the third year of implementation of its massive target of 60 gigawatts (GW) of renewable energy generation by 2030,” it said.
Martine Mamlouk, secretary-general of MESIA, said that investment in solar energy is evident across MENA countries. “Saudi Arabia has a target of almost 60 gigawatts of renewable energy, out of which 40 gigawatts are solar,” she told Arab News.
“This is in line with the Kingdom’s objective of diversification and Vision 2030. While the industry is reaching grid parity, it is great to see the deployment of new innovative technologies to increase efficiency of systems, production management and grids.”
Upcoming solar projects in the Kingdom include Madinah, Rafh, Qurayyat, Al-Faisaliah, Rabigh as well as Jeddah, Mahd Al-Dahab, Al-Rass, SAAD and Wadi Ad-Dawasir, along with Layla and PIF.
Saudi Arabia’s energy demand has been rising steadily, with consumption increasing by 60 percent in the past 10 years, according to data provided by market researchers Frost & Sullivan. Demand for electricity in 2019 reached 62.7 GW and is forecast to rise by up to 120 GW by 2030.
The value of solar-power projects in the MENA region is estimated at between $5 billion and $7.5 billion. By 2024, that figure is expected to approach $15 billion to $20 billion.
Under its Vision 2030 program, the Kingdom aims to reduce its dependency on oil revenues, diversify its energy mix and tap its renewable energy potential.

After the Renewable Energy Project Development Office (REPDO) was set up within the Ministry of Energy, the goals for the Kingdom’s National Renewable Energy Program (NREP) were revised upwards in 2018, resulting in a five-year target of 27.3 GW and a 12-year target of 58.7 GW.
The Saudi government plans to invest up to $50 billion in renewable energy projects by 2023.
“At MESIA, we are excited to see solar developments in the MENA region accelerating and reaching attractive tariffs, while lowering the carbon footprint of regional economies,” Mamlouk said.
“The total investment in renewables in MENA between 2019 and 2023 is expected to be $71.4 billion, representing a 34 percent share of the total investment in the power sector, which is valued at $210 billion.”
Changes introduced by Saudi Arabia include a focus on local developers and easing of regulations for local manufacturers of solar panels.
A Local Content and Government Procurement Authority has been established to oversee and audit local content compliance.
Separately, a Renewable Energy Financing package has been launched by the Saudi Industrial Development Fund to support the growth of utility and distributed-generation sectors.
After solar photovoltaic panels were installed on the roof of a mosque in Riyadh, the King Abdullah Petroleum Studies and Research Center recommended a similar move at other mosques.
Meanwhile, plans for the use of solar panels in the Saudi agro-industry have led to burgeoning interest in the technology, with several industrial facilities expected to have their own units in the not-too-distant future.
For good measure, a regulatory framework to allow exchanges with the power grid is being studied by the Electricity Co-generation Regulatory Authority.
Flexible storage solutions, such as hydrogen, will give intermittent renewable energy a greater share in the energy system, Mamlouk said. “It may enable present-day oil and gas exporters to become key renewable energy exporters tomorrow. The solar industry is thrilled and proud to participate in this profound transformation of Saudi Arabia’s energy system.”
In the past year solar tariffs have fallen to record low levels in the MENA region, mainly due to tremendous cost declines that have brought the goal of grid parity within reach.
With installed solar electricity capacity worldwide standing at 617.9 GW, MENA governments are staying focused on energy diversification with the help of large-scale projects.
In the UAE, Dubai is targeting the completion of a 5 GW facility by 2030 at the Mohammed Bin Rashid Al-Maktoum Solar Park. Abu Dhabi has “engaged” its second-largest solar project and is considering the roll-out of more units by 2025.

Morocco aims to reach 52 percent contribution by renewables in its energy mix by 2030. The figures for Tunisia and Egypt are 30 percent and 20 percent, respectively, by 2022.
Oman expects solar-power plants totaling 1.5 GW to come on stream by the end of 2022. Even Iraq, with all its political troubles and administrative paralysis, has not ignored solar power in drawing up plans for its future energy mix.
“Investments in renewable energy have reached billions in all Arab countries,” Mohammed Al-Taani, secretary-general of the Arab Renewable Energy Commission, said.
“Jordan is spending more on renewable energy, and we encourage people to have more independence with renewables by generating their own electricity to reduce their bills.”

Nevertheless challenges remain when it comes to implementing projects in rural and isolated areas, according to Mustapha Taoumi, a technology expert at the EU-GCC Clean Energy Technology Network. “With regard to issues of power grid and access to the people, we have to prepare for everything and be ready to receive new technology because there are communities with little income and education,” he said.
“Then there is the challenge of implementation on the part of different actors and sectors. Social acceptance is also important as we come with new technologies and (information on) how to use them.
“We have to be innovative when it comes to financing the facilitation process. We have to be fair and democratic,” he said.
Although this is an exciting time for the region, governments will have to step up their efforts since they are still subsidizing the cost of power, Taoumi said.
“Technologies are evolving quickly, so decision-making must keep pace,” he said. “We could end up having smart meters in rural and isolated areas in two to three years.”