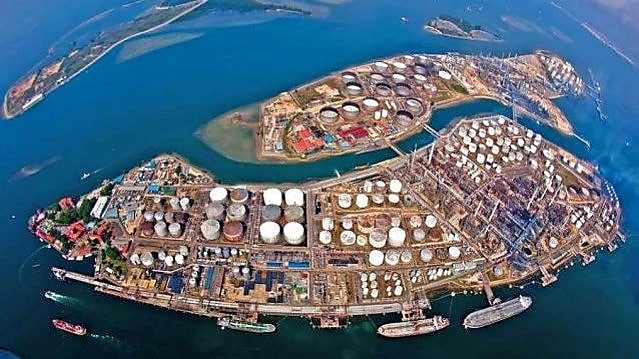 Royal Dutch Shell will halve crude processing capacity and cut jobs at its Pulau Bukom oil refinery in Singapore as part of an overhaul to reduce its carbon emissions.

The refinery on Pulau Bukom, a small island in the Southeast Asian city-state, can process 500,000 bpd of oil and is Shell’s largest wholly-owned refinery worldwide.

The move brings the total refining capacity cuts by Shell in recent months to 571,000 bpd, or just over a fifth of its capacity globally.

Shell aims to reduce the number of its refineries as part of a drive to slash carbon dioxide (CO2) emissions to net zero by 2050 and restructure its operations by reducing its oil and gas business and expanding its renewable energy and power division.

The coronavirus pandemic has destroyed fuel demand, estimated at 4.7 million bpd less during the next five years, and accelerated a rationalization of global refining capacity, Rob Smith, director at consultancy IHS Markit, said.

“Rationalization that would have been spread out over the coming decade will now be compressed within the next few years,” he said.

“What was expected to be a long, slow adjustment has become an abrupt shock.”

More than 8 million bpd of new refining capacity will be completed over the next decade, adding to the excess capacity challenge, Smith said.

As part of the plans, Shell is cutting the number of oil refining and petrochemical sites it will keep operating to six from 14. Besides Pulau Bukom, the other sites are in Texas, Louisiana, Germany, the Netherlands and Canada.

Shell has announced plans to convert its Philippines refinery into an import terminal and shut its largest U.S. facility in Convent, Louisiana.

In September, Shell said it planned to cut up to 9,000 jobs globally, or more than 10% of its workforce.

“Bukom will pivot from a crude-oil, fuels-based product slate towards new low-carbon value chains. We will reduce our crude processing capacity by about half and aim to deliver a significant reduction in CO2 emissions,” Shell said in a statement.

“We will progressively make changes in our refinery configuration over the next three years,” she said.

In Singapore, Shell said it was studying the production of products that would still be viable following its energy transition, such as biofuels and specialties like bitumen.

It is also looking at using different raw materials, or feedstocks, such as recycled chemicals. Shell operates a plant at Bukom that produces 800,000 tons of ethylene a year.

Shell is also expecting its first bunkering ship for LNG to arrive in Singapore later this year. It will be operated by FueLNG, a joint venture with Keppel Offshore & Marine.