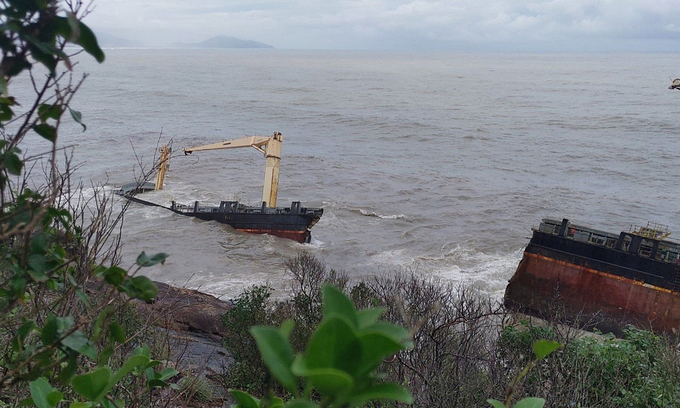 The two halves of a stranded ship containing around 300 tons of oil are separated around 25 m apart off the coast of Thua Thien-Hue Province. Photo by VnExpress/Van An.

A ship containing around 300 tons of oil has been stranded off the coast of central Thua Thien-Hue Province for a week, breaking in half.

The vessel, flying Taiwanese colors, was on its way from Hong Kong to be scrapped in India before running aground near Lang Co Town, Duong Dang Trung, the province’s chairman said Tuesday.

Represented by shipping agency and logistics firm Asiatrans Vietnam, the ship contains around 300 tons of diverse oil, according to the Lang Co border guard. The still intact vessel was first spotted abandoned around a week earlier.

“By October 18, the ship has been ripped apart by waves, with its two sections now about 25 meters apart. No oil leakage has yet been detected,” Trung said.

Asiatrans Vietnam called on Tan Cang Offshore Services JSC to deal with the stranded ship, and by Tuesday morning, buoys had been placed around it to prevent possible oil leakage and spread.

Large waves and the presence of underwater rocks have thus far impeded salvage attempts, according to Tan Cang, adding all oil would be drained once the vessel becomes accessible.

Thua Thien-Hue and other central Vietnam localities have been bombarded by heavy rains and strong winds in the past two weeks, causing floods and landslides. Several ships, either anchored at estuaries or on the move, have been affected by current weather conditions.

At least 105 people have died and 27 others gone missing in the region as of Tuesday morning, according to the Central Steering Committee on Natural Disaster Prevention and Control.