The project is also China’s first 10,000-ton level solar-generated green hydrogen demonstration project. With a total investment of around 3 billion yuan ($470 million), it is expected to produce 20,000 tons of green hydrogen annually after being put into operation in 2023. The project is expected to reduce carbon dioxide emissions by 485,000 tons each year and help further facilitate China’s efforts to peak carbon emissions by 2030 and achieve carbon neutrality by 2060, said the domestic oil giant, also known as Sinopec, the world’s top refiner by capacity.

An analyst said the project plays a key role in ensuring economic and social development in Xinjiang while also ensuring domestic energy security. 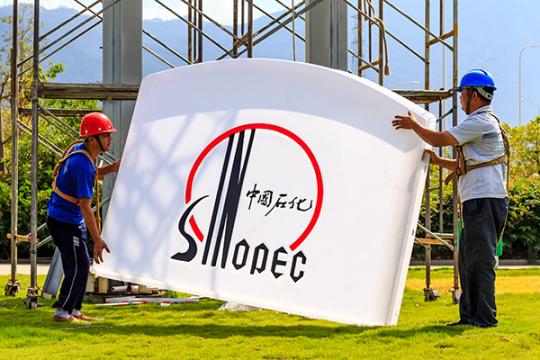 Workers change the billboard at a Sinopec gas station in Fuzhou, Fujian province

China’s northwest is rich in renewable energy and is a key place to develop green hydrogen as it is generated from renewable energy, said Luo Zuoxian, head of intelligence and research at the Sinopec Economics and Development Research Institute.

The green hydrogen industry involves several sectors including production, supply, storage and sales, and China is still at the beginning phase. It’s necessary to focus more on it and accumulate more experience for future large-scale development, Luo said. Thanks to technological advances, the cost of green hydrogen or renewable-based hydrogen will be further lowered, he added.

The demonstration project is the first time for China to utilize solar energy to produce hydrogen on a large scale. It includes photovoltaic power generation, power transmission and transformation as well as hydrogen production, storage and transport, said Sinopec. The project will also have a 300 megawatt photovoltaic power station capable of producing 618 million kilowatt-hours of power each year. The green hydrogen will be provided to Sinopec Tahe Petrochemical Co Ltd, a subsidiary of Sinopec, and replace the current hydrogen production project generated from natural gas and fossil fuels, said the company.

Energy consultancy Wood Mackenzie declared the 2020s “the decade of hydrogen”, saying it is part of a long-term climate strategy for many governments. Ma Yongsheng, president of Sinopec, said hydrogen is one of the clean energies that has the biggest development potential, and the company will further invest in hydrogen while expanding other new energy businesses during the 14th Five-Year Plan (2021-25).