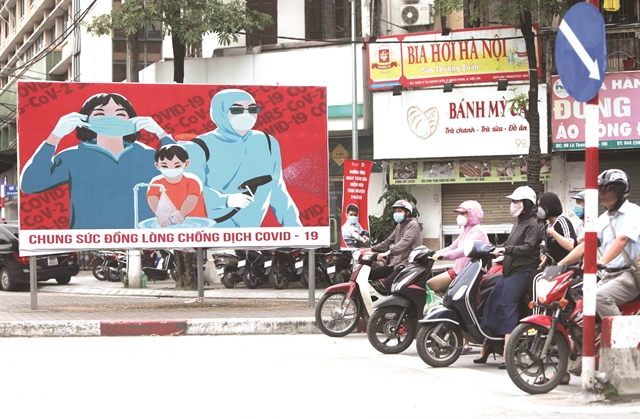 People stop at red light at an intersection on Lê Thánh Tông Street of Hà Nội on April 22. A board depicting measures to keep the virus at bay, including washing hands and wearing masks, can be seen in the background. — VNA/VNS Photo Thanh Tùng

HÀ NỘi — With agreement from the Government, Hà Nội’s administration announced that strict social distancing measures in place to curb the coronavirus would expire at midnight on Wednesday.

With the restrictions lifted, many non-essential businesses in Hà Nội will be allowed to resume as long as they ensure proper hygiene practices for customers and workers, while schools are slated to re-open in early to mid-May.

Nguyễn Đức Chung, chairman of Hà Nội’s People’s Committee, made the announcement on Wednesday afternoon following a Government meeting to discuss whether to extend Prime Minister Nguyễn Xuân Phúc’s Directive 16 on nationwide social distancing, which took effect on April 1 and was due to end on April 22.

The capital city has reported 112 COVID-19 cases out of the national tally of 268, with 81 already recovered while 31 remain in treatment.

Hà Nội was initially deemed to be in the high-risk group, and the National Steering Committee for Preventing and Fighting COVID-19 on Wednesday morning still recommended that the city should comply with Directive 16 for at least another week (until April 30) just to be on the safe side.

Hà Nội’s leaders however asked the Government for a downgrade to a medium-risk classification in order to reactivate its economy and life, while pledging full-force preventive measures to contain the spread of the virus under the motto “quick detection, identification of outbreak areas and suppressing the outbreak, while preventing community widespread transmission”.

The Vietnamese Government leader agreed with Hà Nội’s request, on the basis of the achievements and outcomes the city’s authorities had made in dealing with detected outbreaks in its jurisdiction.

The Hà Nội leader said he had assigned relevant agencies to develop detailed plans to ease social distancing measures in the city, which would be released soon.

Directive 16 measures will remain in effect in two outlying districts of the city – Thường Tín and Mê Linh – identified as high-risk areas.

According to Nguyễn Đức Chung, the city had already made plans for students to return to school. Secondary high school students and above would start back at school on May 4, while primary schools and kindergartens would start to re-open on May 11.

However, religious gatherings, celebrations and all sporting and cultural activities are still banned. Bars, karaoke venues and massage parlours are still not allowed to operate yet.

The city will not be receiving foreign tourists for the time being.

Sidewalk economic activities – with iced tea and lemon tea shops set up alongside busy pavements cited as examples – which make up part of the charm of Hà Nội, will also be forbidden.

People are told to maintain a safe distance of 2m in the open and those who fail to wear face masks in public will be fined.

Restaurants, food stalls, malls and supermarkets can re-open, as long as the safe distance is adhered to. These venues must also set up hand washing stations and visitors and customers must have their temperatures checked.

“[Restaurants and food shops] should follow other countries’ examples, setting up glass, nilon or plastic barriers to minimise risks of infection for the customers sitting opposite each other,” Chung said.

Transport businesses are also allowed to resume but with reduced capacity, about 20-30 per cent.

Manufacturers, companies and agencies must carry out proper prevention measures for their employees – obligatory mask wearing and a full supply of hand sanitiser.