Forced by a supply shortage, many gas stations in southern Vietnam have stopped sales.

As of Monday, over 20 gas stations in the southern province of An Giang had stopped selling due to a shortage of supply, losses or lack of employees. Several stations said they plan to shut down after Saturday. “Some of these stations do not have inventory to sell and have to shut down,” said a report by An Giang Market Authorities. 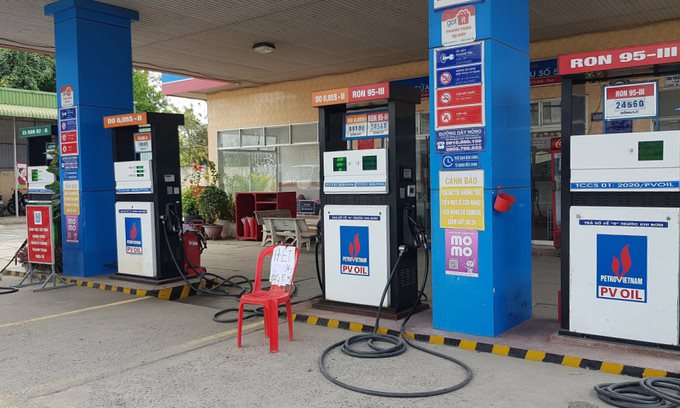 A closed gas station in southern An Giang Province, February 7, 2022

Huynh Ngoc Ho, Head of the agency, said that most of these stations have requested permission from the Ministry of Industry and Trade to cease sales. “We are still examining their claims. If they are trying to hold back inventory to bring prices up, we will fine them.”

In Hanoi and HCMC, although most stations operated normally Tuesday, some had not chosen a date to resume selling after the nine-day holiday as their supply dwindled. “Supply has dropped by around 30-40 percent, and our inventory is running out,” said Do Thanh Han, CEO of HCMC-based fuel distributor Quoc Thang Trading with eight stations.

The supply shortage has been anticipated since last month when the country’s biggest refinery Nghi Son had to cut production from 105 percent of capacity to 80 percent because of financial problems. Although the refinery has been able to secure short-term financial support, it is still operating at 60-80 percent of capacity, said Tran Duy Dong, head of domestic markets under the Ministry of Industry and Trade.

An employee of a gas station in Hanoi, who asked not be identified, said that the station only received one 20-cubic-meter truck Tuesday, even though the station usually sells 50 cubic meters of petrol a day. The suppliers have been struggling to get and make supplies, the employee said. Rising prices of fuel is another reason that gas stations are struggling to keep their business going.

Han of Quoc Thang Trading said that his commission is now around VND100 ($0.0044) per liter, compared to VND200-1,000 in the past. If Nghi Son Refinery doesn’t resume normal operations, the supply shortage will continue, he said.

Some other gas stations have reported that they are selling fuel with zero commission, while others are selling the popular RON95 gas at a loss of nearly VND1,500 per liter. “Without intervention from authorities, we will have to shut down sooner or later,” said a station manager in the northern province of Vinh Phuc.

Do Thang Hai, Deputy Minister of the trade ministry, said that officials were “doing all they can” to ensure adequate gas supply.