Vietnam will need to cut taxes and fees, in addition to using the petroleum price stabilization fund if petrol prices keep rising, said a leader from the Ministry of Industry and Trade (MoIT).

On February 11, retail petrol prices were increased by nearly 1,000 VND per litre following the latest adjustment by MoIT and the Ministry of Finance (MoF). The retail price of RON95 bio-fuel rose by 962 VND to a maximum of 25,322 VND (1.12 USD) per litre, the highest since August 2014. 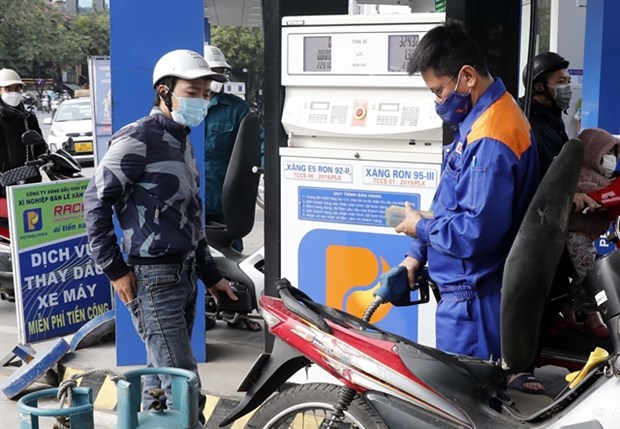 On February 11, the retail petrol prices increases by nearly 1,000 VND per liter, reaching the highest since August 2014

Tran Duy Dong, Director of the MoIT’s Department of Domestic Market, told local media a few days after the rise that the increase should have been applied on the first day of February but earlier at a Government’s meeting, MoF and MoIT pointed out that the petroleum prices had a great impact on the consumer price index (CPI), which already rose by 1.94 percent in January and the core inflation rate was 0.66 percent, so they delayed the rise.

Dong said:  “The Government and ministries have to weigh the pros and cons to ensure the interests of people and enterprises while ensuring macroeconomic stability.” He said if MoIT had raised petroleum prices earlier, the move would have faced pressure from the public.

Mentioning that some filling stations announced they had run out of petrol, MoIT’s leader affirmed that filling stations still had petrol, but are not selling because they were trying to hoard petrol, waiting for price escalations.

Dong said: “Hoarding petrol for speculation, which causes shortages in some localities, distributors and sales agents will be strictly punished.” He said the MoIT minister had signed a decision to set up three inspection teams that will visit some localities to inspect petrol supply. MoIT has also sent a dispatch to localities, asking provincial people’s committees to intensify inspections and monitor petroleum sales.

Dong said: “It’s necessary to share difficulties with petroleum enterprises as the supply was disrupted when the Nghi Son Oil Refinery cut capacity. And import prices have escalated, causing losses for importers.” He also asked petrol enterprises to share difficulties with nearly 100 million people and support the state’s efforts for macroeconomic stability. Dong added that enterprises have to observe regulations on inventories and sales, and must not hoard petroleum products for speculation, which affects supply.

The MoIT leader said though the situation was better now than early February, the shortages in some localities still have not been resolved completely, partially because Nghi Son Oil Refinery was still running at 55 percent of capacity and imports had not arrived. The supply in the market has become better, but some filling stations in some localities are still lacking petrol for sale, he said. Because of geopolitical factors related to the conflict between Russia and Ukraine, petroleum prices have been fluctuating heavily, affecting domestic prices, said Dong. “The supply will improve soon when more imports arrive.”

Economist Dinh Trong Thinh said that Vietnam’s petrochemical projects met more than 70 percent of domestic demand. Thinh said the state’s petroleum reserves were still very low as “reservation of petroleum is a very difficult problem because the warehouse and wharf facilities are still modest and the state does not have enough large foreign currency sources to focus on petroleum imports.” Thinh said petroleum reserves required strict requirements on geology, climate, fire and explosion prevention as well as issues related to security, politics and society so it was a matter of time for things to improve.

When the petroleum reserve is large enough like many other countries in the world, Vietnam will be able to proactively supply as well as intervene promptly in all market fluctuations, he said. Thinh considered monitoring and forecasting the trend of world gasoline prices a challenge in Vietnam.

It is necessary to negotiate to buy and sell on terms of three months, six months or one year so it was necessary to have data that gathers factors such as supply, demand, and geopolitical impacts that could create advantages or disadvantages. He said: “Currently, Vietnam is weak in both data sources as well as human resources in market analysis and forecasting,” urging the country to focus on building them.

As the stabilization fund can only intervene in the short term, in the long run, Vietnam should gradually build an open petroleum market in which local prices were closed to the world petrol price and the time to adjust the petrol price should be shortened to five to seven days. For MoIT, if the prices continue escalating and crude oil price surpasses 100 USD per barrel, the director said it would be necessary to cut taxes and fees to stabilize prices, in addition to using the petrol price stabilization fund.

Dong said: “If the prices are overly high, this will have the effect of neutralizing some tools and policies being applied to help recover the economy, which has been hit hard by COVID-19. This includes the policy on VAT reduction of 2 percent,” he said.

Some years ago, MoIT proposed tax and fee reductions for petroleum, but the MoF rejected it saying tax revenue from the products made a big contribution to the state budget.