Partnering with American firms would shrink Vietnam’s trade surplus with the US—and help Hanoi hold the line in the South China Sea. 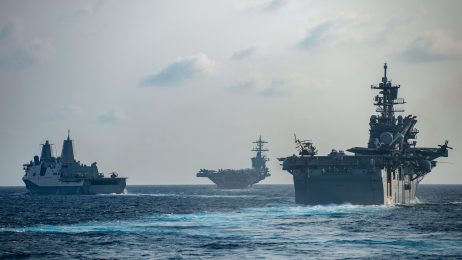 As a fast-growing economy, Vietnam’s demand for energy is projected to increase by between 8.5 and 9.5 percent annually. over the next five years. Together with the need to reduce its dependence on coal-fired power plants, this has led Vietnam to explore alternative energy sources. In addition to investing in renewable energy, Vietnam is also seeking to work with United States-based partners to develop oil and gas supplies and gas-fired power plants—an effort fueled by  strategic calculations, as well as purely economic motivations.

Vietnam is currently working with ExxonMobil to develop the Blue Whale gas field off the country’s central coast, which has an estimated reserve of 150 billion cubic meters. Gas from this field will be used to run three gas-fired power plants slated to be built at the nearby Dung Quat Economic Zone. In November 2019, the American firm AES Corp also won approval  to build the 2.25 GW Son My 2 gas-fired power complex in Binh Thuan province. The plant will be powered by liquefied natural gas (LNG) imported from the US.

Apart from the Son My 2, Vietnam is currently developing four other gas-fired power projects using imported LNG, namely Ca Na 1 (1.5 GW), Son My 1 (2.25GW), Bac Lieu (3.2 GW), and Long Son 1 (1.2 GW). According to Vietnam’s Ministry of Industry and Trade, these new projects will push the total installed capacity of Vietnam’s gas-fired power plants up from 9 GW at present to 19 GW by 2029, meaning that the country will have to increase its LNG imports.

At the same time, the U.S. has emerged as the third largest LNG exporter in the world. In 2019, the U.S. accounted for more than half of new global gas liquefaction capacity. The fast-expanding American LNG industry and Vietnam’s growing demand for imported LNG open up a possible new frontier for Vietnam-U.S. cooperation. Once it comes into operation, for example, the Son My 2 power complex will create an annual demand for American LNG worth $2 billion. This is a significant amount given that in 2019 Vietnam’s total import turnover from the U.S. stood at $14.4 billion.

Although it could potentially import LNG from a number of different countries, Hanoi is particularly interested in tapping American suppliers, given the ability of these purchases to help improve its trade balance with the U.S.

According to Vietnam Customs, Vietnam registered a trade surplus of $47 billion with the U.S. in 2019. This swelling trade differential has long been a source of resentment for the administration of President Donald Trump, who in mid-2019 labelled Vietnam  a trade “abuser” and threatened to impose tariffs on its exports. In response, Vietnam committed  to improve the trade balance, especially by increasing its imports from the U.S. Purchasing American LNG to fuel its planned gas-fired power plants is therefore a strategy that could help Hanoi kill two birds with one stone.

Addressing the concerns of the Trump administration is important for Hanoi, as the U.S. is currently Vietnam’s largest export market, and any punitive tariffs imposed by Washington would significantly hurt Vietnam’s exports and threaten its economic growth more broadly. Strategically, the U.S. currently plays a key role in Vietnam’s efforts to push back China’s coercive actions in the South China Sea. During major bilateral confrontations in the South China Sea in 2014 and 2019, for example, U.S. diplomatic backup proved essential to Hanoi’s attempts to mobilize international support against China’s bullying behavior.

In this connection, China’s repeated harassment of Vietnam’s oil and gas activities in the South China Sea gives Vietnam another good reason to engage U.S. firms like ExxonMobil for its oil and gas projects, especially given that other foreign partners have proven unable to resist Chinese intimidation. After the Spanish oil firm Repsol decided to cancel production sharing contracts with Petro Vietnam (PVN) for three blocks near Vanguard Bank in the South China Sea, PVN’s longstanding Russian partner Rosneft also appears to be buckling under Chinese government pressure.

Recently, the U.S. has hardened its stance on China’s expansive maritime claims in the South China Sea and condemned Beijing’s obstruction of other claimant states’ lawful oil and gas activities in their waters. Against this backdrop, working with American firms to develop hydrocarbon resources could be a workable strategy for Hanoi, given that Washington will be more willing than most other countries to offer backing to its firms in the face of Chinese harassment.

Vietnam’s longstanding position is to avoid confrontation with China and maintain a balance between China and the U.S. On the one hand, given the intensifying strategic rivalry between the two powers, partnering with American firms for oil and gas projects in the South China Sea and strengthening ties with Washington carries the risk of antagonizing China.

On the other hand, Hanoi cannot afford to keep bowing to China’ pressures. Despite Vietnam’s goodwill and efforts to moderate its rapprochement with Washington in order not to offend Beijing, China keeps applying more and more pressure on the Vietnamese government by repeatedly disrupting its offshore oil and gas activities. It is therefore imperative for Vietnam to transform oil and gas cooperation with the U.S. into a form of strategic leverage against China’s maritime coercion.

In the end, if Hanoi opts to move closer towards Washington, Beijing has only itself to blame. It is China’s maritime expansionism and bullying actions that are forcing Vietnam’s hand. Indeed, failing to stand up to China’s intimidation will not only threaten its sovereignty in the South China Sea, it will also place its long-term energy security and economic prosperity in jeopardy.