Back to the news list
U.S. says most of China’s claims in South China Sea are unlawful 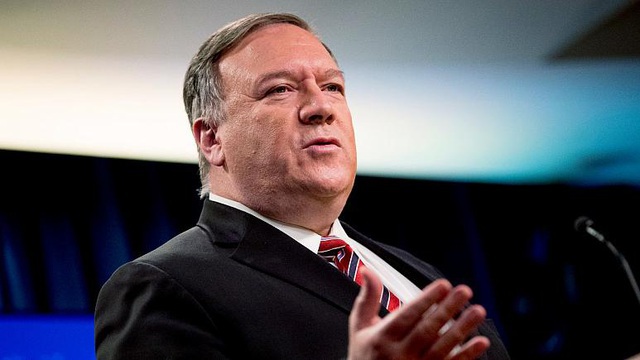 Secretary of State Mike Pompeo speaks during a news conference at the State Department last Wednesday.

“The world will not allow Beijing to treat the South China Sea as its maritime empire,” Secretary of State Mike Pompeo said.

The United States and the world “will not allow Beijing to treat the South China Sea as its maritime empire,” Secretary of State Mike Pompeo said Monday, prompting China to hit back, reflecting a ratcheting up of tensions between the two powers amid deteriorating relations.

“We are making clear: Beijing’s claims to offshore resources across most of the South China Sea are completely unlawful, as is its campaign of bullying to control them,” Pompeo said in a statement, referring to the contentious and potentially energy-rich stretch of water.

The U.S. has long opposed China’s expansive territorial claims in the South China Sea, regularly sending Navy patrols through the strategic waterways to demonstrate freedom of navigation there. Most recently, on July 4, two U.S aircraft carries carried out operations in the area as the Chinese military conducted drills nearby.

Beijing, in turn, has accused Washington of interfering and stirring up tensions in the region.

China hit back Tuesday, outlining its historical claims to the waters and stating that the U.S. was trying to “sow trouble” and had acted like a bully by sending frequent vessels to the area.

“The U.S. is the destructor and troublemaker of regional peace and stability, and the international community sees it very clearly,” Chinese Foreign Ministry spokesperson Zhao Lijian said during a press briefing, according to the state-owned Global Times newspaper.

“We are strongly dissatisfied with and firmly opposed to the wrong actions of the U.S. and urge the U.S. to stop creating troubles on the South China Sea issues … China will continue to resolutely safeguard its sovereignty and security in accordance with the law.”

The  Chinese Embassy in Washington also said Monday that the U.S. was “throwing its weight around in every sea of the world.” Adding, it was “not a country directly involved in the disputes” and was interfering.

“Under the pretext of preserving stability, it is flexing muscles, stirring up tension and inciting confrontation in the region,” the statement said.

About $3 trillion of trade passes through the contentious waterway each year and analysts say it will be key to see whether other countries such as the Philippines or Vietnam adopt the U.S. stance and what, if anything, Washington might do to reinforce its position.

The numerous overlapping sovereign claims to islands, reefs and rocks — many of which disappear under high tide — have turned the waters into a zone of competing diplomatic interests, embroiling neighbors.

China claims 90 percent of the South China Sea, but Brunei, Malaysia, the Philippines, Taiwan and Vietnam also lay claim to parts of it.

In April,  Vietnam  lodged an official protest with China, following the sinking of a Vietnamese fishing boat it said had been rammed by a Chinese maritime surveillance vessel near the Paracel Islands. China denied the claims and said the Vietnamese boat had illegally entered the area.

In 2016 an international arbitration tribunal, in which China did not participate, invalidated most of China’s claims for maritime rights in the South China Sea, under the U.N. Convention on the Law of the Sea (UNCLOS). China however rejected the ruling, preferring instead to negotiate directly with the claimants, and has criticized the U.S. for not signing up to the U.N. convention at all.

Earlier this month, Japan accused China of pushing its territorial claims amid the coronavirus pandemic and said Beijing was “continuing to attempt to alter the status quo in the East China Sea and the South China Sea,” in a defense white paper approved by Prime Minister Shinzo Abe’s government, according to Reuters.

The U.S. and Thailand also signed a “Strategic Vision Statement”, according to the U.S Embassy in Thailand this month, as Washington looks to reassure allies about its commitment to the region.

The relationship between the U.S. and China has grown increasing tense  over the past six months over Beijing’s handling of the coronavirus pandemic, its tightened grip on Hong Kong  and its crackdown on China’s Uighur Muslim community.