Minister of Industry and Trade Nguyen Hong Dien on May 11 (local time) accompanied Prime Minister Pham Minh Chinh in many activities in the US, including meetings with US partners operating in the field of energy.

US partners are interested in Vietnam’s energy development orientations for the next years, especially the Power Development Planning VIII (PDP8) as well as the adjustments and supplements to the legal framework that paves the way for the development of a competitive power market in Vietnam. 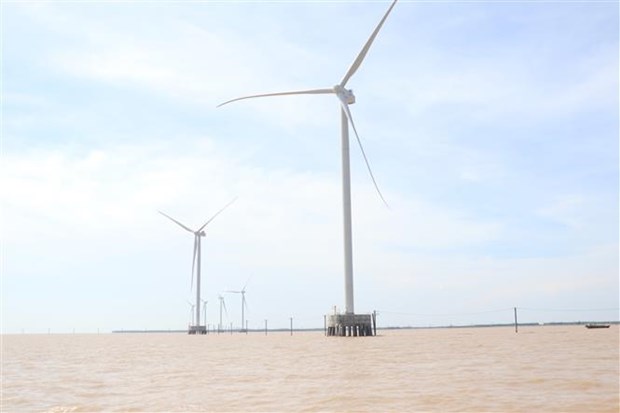 At a meeting with US Secretary of Commerce Gina Raimondo, PM Chinh highly valued of the remarkable development in economic – trade relations between the two countries in recent years.

For her part, Raimondo spoke highly of the economic development vision and plan of the Vietnam, especially the transformation to the digital economy, increasing the use of clean energy, promoting green economy, and diversifying supply chains.

In this process, the Ministry of Industry and Trade, as the Chair of the Vietnam-US Trade and Investment Framework Agreement (TIFA) has chaired, coordinated and promoted policy dialogues through the TIFA Council, thus settling many problems in the bilateral relations.

On the occasion, PM Chinh and Raimondo witnessed the exchange of cooperation agreements among ministries, sectors and businesses of the two sides in many areas such as energy and climate change response, helping Vietnam realise commitments at COP26. They included the investment licence to AES and PetroVietnam Gas Corporation for the Son My LNG warehouse; the cooperation deal in power generation and transmission and the supply of services to gas-fueled power projects in the period of 2022-2027; and the agreement on investment cooperation to raise the operation efficiency of Nhon Trach 1 Power Plant.

At a working session with leaders of Texhong Textile Group from Hong Kong (China), Dien said foreign businesses have made full use of free trade agreements that Vietnam has signed and paid attention to the origin of products.

Texhong Textile Group’s Chairman Hong Tianzhu thanked Vietnamese authorities for supporting the firm during its operation in Vietnam. He said that over a half of the  group’s investment abroad, equivalent to over 1.5 billion USD, was poured in Vietnam, adding that it is employing more than 25,000 labourers.

Noting that the majority of materials for the group’s production is imported from the US, he said, expressing his hope to receive more support from the Ministry of Industry and Trade during the settlement of negative information on the origin of imported cotton for fabric production.

Dien underlined that the ministry is willing to send letters to relevant agencies of the US, asking them to ensure legitimate interests of the Vietnamese garment and textile sector as well as Vietnamese workers and US consumers during the building and implementation of laws that may affect Vietnamese businesses, thus not creating barriers for Vietnam’s garment and textile exports and allowing enterprises to explain their products’ origin.

The same day, Dien joined a meeting with US Secretary of Finance Janet Yellen, attended a talk at the Centre for Strategic and International Studies (CSIS), and participated in meetings with Cambodian PM Hun Sen, Director General of the World Bank Axel Van Trotsenburg and leaders of Asia Group, Blackstone, and GenX/AES.