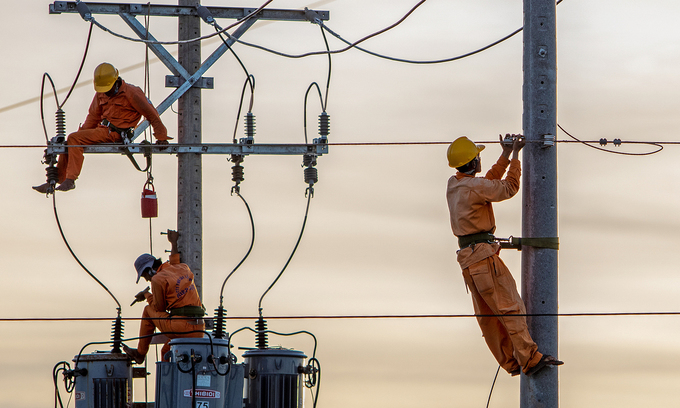 Electricians work on the poles in southern Bac Lieu Province, May 9, 2020. Photo by VnExpress/Nguyet Nhi.

With its energy deficit rising every year, several experts are advising Vietnam to reconsider the shelved nuclear power program.

Nuclear energy is one of the recommendations made by experts as the Industry and Trade Ministry (MoIT) gathers public inputs for its 2021-2030 National Energy Master Plan (with orientation towards 2050).

Tran Xuan Hoa, Chairman of the Vietnam Mining Technology Association, said that as Vietnam’s net energy imports continue to rise, it is getting harder and harder to find sources that would allow the country to access stable energy sources to meet its socio-economic development goals.

A restart of the nuclear development program should be included in the national master plan, he said, adding that compared to other types of energy currently available, nuclear energy was “still relatively safer and low-priced”.

This is the first time that Vietnam is working on a comprehensive national energy master plan. Prior to this, energy plans were made on a piecemeal basis, that is, for each individual energy sector.

Hoa said Vietnam had in 2016 approved a nuclear power development plan which would build two plants with a designed capacity of 4,000 MW per year in the southern province of Ninh Thuan. Work on the plants was set to start the same year.

However, in November 2016, the National Assembly decided to suspend all nuclear development until 2030, saying it wanted to allocate capital for coal and gas, modernizing infrastructure to boost socio-economic development and adapting to climate change.

Nuclear energy is mentioned in the draft master plan released for receiving feedback, but it envisages development of this energy to begin after 2035. The draft envisages national nuclear power capacity reaching 1,000 MW by 2040 and 5,000 MW by 2045.

“We have halted nuclear production for many reasons, but a restart should now be considered. Unfortunately, in the short term, the national energy plan has not mentioned anything about nuclear development,” Hoa said.

Nguyen Anh Duc of the MoIT’s Institute of Petroleum said tapping alternative sources of energy should be a key consideration as coal, oil and gas reserves get depleted.

Since 2015, Vietnam has shifted from being a net exporter to a net importer of energy. Imports of coal, and oil and gas, two sources of raw materials that account for a major proportion the country’s primary energy supply, has been rising steadily during this period, an MoIT report has said.

While Vietnam targets extraction of 50-56 million tons of coal per year, the Vietnam National Coal and Mineral Industries Group (TKV) has only been able to achieve 45 million tons per year as it is having to dig deeper and deeper to access the mineral. The rest is imported to ensure sufficient supply for electricity development, consumption and production needs.

Vietnam has spent around $2.6 billion on importing 36.5 million tons of coal in the first seven months of this year, up 50 percent in volume year-on-year, according to Vietnam Customs.

As for gas, currently most 2020 targets have been met or exceeded, save for liquefied petroleum gas (LPG) production, at only 50 percent; while processing, storage and distribution providers have only been able to meet 25 percent of the country’s petrochemical processing demand this year, Duc said.

Production is currently at around 9-10 billion cubic meters, but this is expected to decrease after 2023 when output declines at most oil and gas fields being exploited now.

To resolve this, the government needs to find ways to ease bottlenecks for investment in gas exploitation. “Procedures, legal corridors, and policy mechanisms for the oil and gas sub-sector need to be set out in detail in this comprehensive energy plan to attract investment in exploration in deep and remote waters,” Duc said.

Vietnam will have to import 1-4 billion cubic meters of liquefied natural gas a year in 2021-2025 to meet growing power demand, the MoIT assessed in a report released last year.

Hoa said that two years ago, the solar power feed-in-tariff (FIT) was very attractive at a fixed 9.35 cents a kWh. Now, it has decreased to 7.09-8.38 cents per kWh, depending on the type of investment. Given falling renewable energy prices, the national master plan should promote the development of this type of energy over others, he added.

Data released by national utility Vietnam Electricity (EVN) shows that as of June-end this year, 5,482 MW of solar power capacity had been installed, accounting for 9.5 percent of the country’s power sources. By mid-August, there were nearly 45,300 rooftop solar power projects operating with a total capacity of 1,029 MWp, an output of about 500,692 MWh.

According to Tai Anh, Deputy General Director of EVN, as long as renewable energy accounts for less than 20 percent of national capacity, the power grid will not need additional investment.

But if it does, then the system will require many new solutions such as additional storage batteries to maintain balance, and money would have to be set aside to deal with environmental impacts when renewable energy machinery expires, inflating costs, he said.

“If Vietnam wants to raise its renewable energy capacity, how much we can afford to subsidize and how much the economy can withstand are factors needed to be considered carefully before making an appropriate choice,” he said.

“Most businesses dare not invest in coal mines, deeming the risks too great,” he said.

Nguyen Thuong Lang of the MoIT’s Institute of Commerce said energy prices are set by the Ministry of Finance, and unless businesses are allowed to set prices according to market forces, it would be very difficult to make effective feasibility appraisals of potential energy projects.

So far, no market price mechanism has been mentioned in the MoIT’s draft energy master plan, he noted.

Lang said that the roles of the state and the private sector will have to be redefined and the market allowed to decide prices, which will be more efficient. As Vietnam’s economy transforms rapidly, prices should be allowed to match changes in the country’s economic structure, he added.

Pointing to the fact that no truly large-scale energy project has been started in the last five years, Hoa said that the reason why businesses do not dare to invest is the lack of a market mechanism, with many energy sectors still having prices set by the Ministry of Finance.

“Therefore, it is necessary to get the energy sub-sectors to coordinate with the Government, localities and enterprises to resolve this issue,” Hoa said.

Deputy Prime Minister Trinh Dinh Dung had said at the Vietnam Energy Summit 2020 in July that Vietnam needs another 5,000 MW in power plant capacity by 2025, which will cost it around $7-10 billion each year.

Vietnam currently relies largely on hydropower and thermal power for its electricity needs, but its hydropower potential is almost fully exploited and oil and gas reserves are running low.

Coal-powered plants accounted for 36.1 percent of electricity supply last year, followed by hydropower at 30.8 percent, according to the Vietnam Energy Association.

The MoIT plans to incorporate feedback on the draft National Energy Master Plan and submit its final version to the Government by the end of this year.