The 2022 operation and fuel production outlook of Vietnam’s biggest refining complex remains in jeopardy after it slashed its operation rate on failure to pay for Kuwaiti crude for January delivery due to a severe liquidity shortage.

State-owned PetroVietnam and several other stakeholders of the 200,000 b/d refinery, located in central Vietnam, have agreed on a short-term emergency funding plan that would help the plant purchase its staple feedstock — Kuwaiti crude — and maintain normal operations. However, industry sources said the funds may only prove to be a temporary solution.

PetroVietnam has a 25.1% stake in Nghi Son alongside Kuwait Petroleum International with 35.1% and Japan’s Idemitsu Kosan with 35.1% and Mitsui Chemicals with 4.7%.

With international benchmark crude prices surging past the $90/b mark, it has becoming extremely costly to secure feedstock crude oil every month and the emergency funds may not be able to guarantee the refinery’s stable operation throughout the entire year, said a crude trading manager at one of the stakeholders, who declined to be identified due to the sensitive nature of business operations.

Nghi Son may be able to maintain certain a level of run rate and middle distillates production for now but the outlook for the entire year remains bleak, as local fuel trading and distribution companies are struggling to secure term supplies with the refiner, according to domestic transportation fuel traders at distributors, including Petrolimex.

Vietnam’s Vice Minister of Industry and Trade Do Thang Hai acknowledge that oil stations in some provinces have temporarily suspended sales of oil products due to shortage of supply in recent weeks.

In an effort to make up for Nghi Son refinery’s faltering run rates and fuel production volumes, state-run Binh Son Refining and Petrochemical raised its Dung Quat refinery run rate Feb. 7 to 105% from 103%. This was the second increase BSR has made in the last two weeks, following the capacity hike to 103% from 100% announced Jan. 26.

However, the higher runs and output at Dung Quat would not be sufficient to cover the shortfall from the 200,000 b/d Nghi Son plant and Vietnam will likely increase imports from major suppliers like South Korea and Malaysia in the coming months, which would be a setback to Hanoi’s ambition to achieve self-sufficiency in liquid fuel needs by around 2025, market participants said.

Taking Vietnam’s fragile oil products output capacity into consideration, many regional refiners, especially South Korean and Malaysian fuel producers, have been eager to seize the opportunity to boost transportation fuel sales to the Southeast Asian country with a population of close to 100 million. 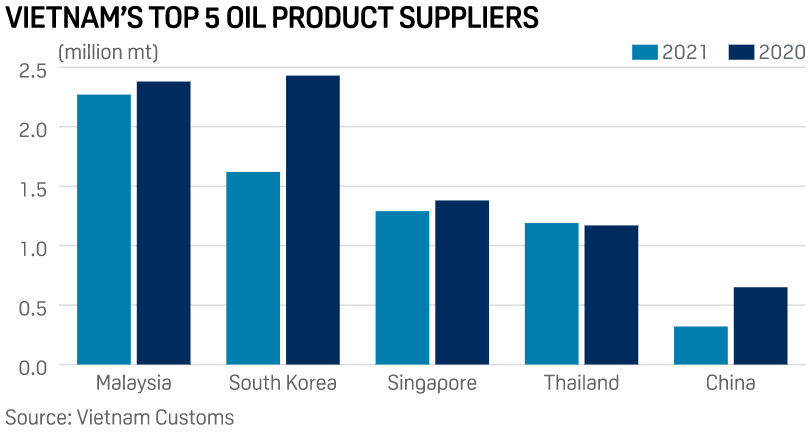 South Korea was traditionally Vietnam’s biggest oil products supplier over the past two decades, before losing its top status to Malaysia in 2021, according to latest data from Vietnam Customs.

South Korean refiners told S&P Global Platts they are eager to revive their middle distillates exports to Vietnam, especially after recent few years of lackluster sales due mainly to the completion of the Nghi Son refinery complex and the outbreak of the pandemic. 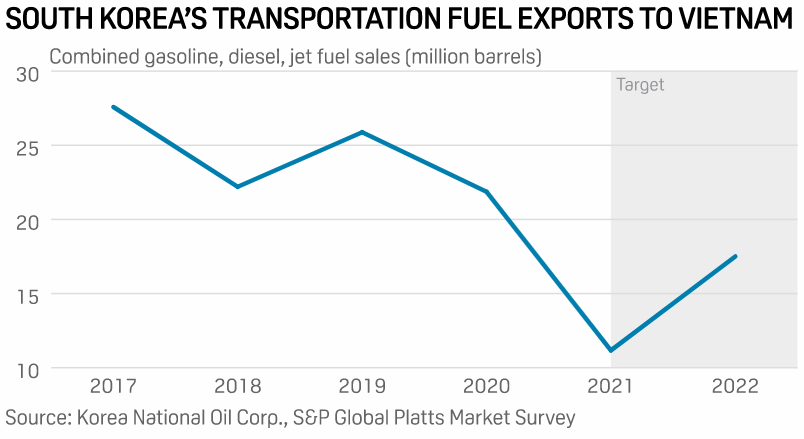 “The target could be raised later in the year if Asia’s aviation and tourism sectors stage a full recovery,” said a marketing manager at S-Oil.

“Vietnam’s short position is a golden sales opportunity since Malaysia’s overall refinery crude runs and fuel production is poised to rise sharply this year, thanks largely to the restart of the country’s 280,000 b/d Pengerang Integrated Complex,” according to a diesel and petrochemicals product marketer at state-run Petronas.