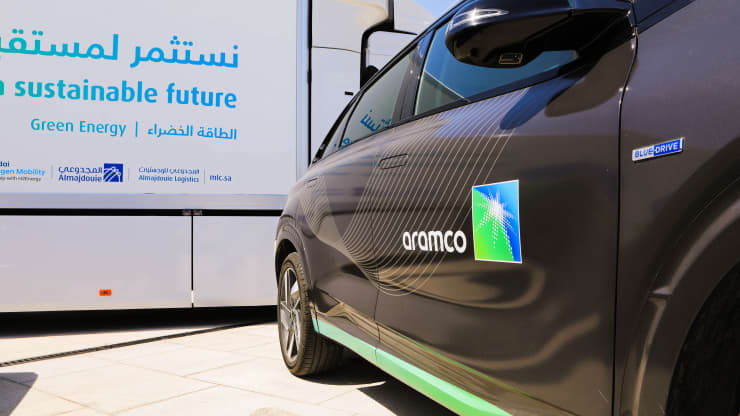 A hydrogen-powered vehicle, operated by Saudi Aramco, on display at the Air Products New Technology Center in Dhahran, Saudi Arabia, on Sunday, June 27, 2021

Saudi Arabia’s oil giant Aramco is stepping up efforts to promote initiatives in hydrogen technology and investments to reduce carbon emissions, after a harrowing investor smackdown for Big Oil.

“Today we’re showing that the technologies for the use of hydrogen are mature and commercially available… and we see this kind of as an inflection point in the market for hydrogen,” Al Khowaiter said.

Aramco, the world’s largest oil company, didn’t detail any new hydrogen investment plans at the event. Instead, executives outlined their vision for a lower carbon future where hydrogen can be deployed at scale before the end of the decade.

“We see a real market forming,” Al Khowaiter said. “This is an opportunity for us to supply a new market, a growing market, and a sustainable market, because it is a decarbonized energy product.”

Experts in the energy field see hydrogen as a major potential gamechanger. The U.S. Department of Energy says hydrogen “can deliver or store a tremendous amount of energy” and “can be used in fuel cells to generate electricity, or power and heat.”

Described by the International Energy Agency (IEA) as a “versatile energy carrier,” hydrogen is deployed for a wide range of uses and in sectors like industry and transport.  Currently, however, the vast majority of hydrogen generation is based on fossil fuels, and cleaner hydrogen produced from renewables is more expensive to produce.

Aramco sees that changing in the coming years.

The hydrogen push comes after Big Oil was hit with a climate triple punch last month. Activist investors successfully campaigned to join the board of Exxon,  rebellious shareholders at Chevron pushed through plans to cut emissions, and a Dutch court orderd Royal Dutch Shell to cut its pollution by nearly half by the end of 2030.

The tumult at three of the world’s largest publicly listed energy companies has challenged Aramco to show it can address the climate challenge, while still supplying a huge portion of the world’s growing energy needs and advancing Saudi Arabia’s economic transformation plan.

“We have the lowest-emission hydrocarbons,” Al Khowaiter said. “We have an ability to capture CO2 and therefore supply hydrogen reliably at reasonable cost, without the CO2,” he added, while suggesting investments in hydrogen would be announced when Aramco can make deals with prospective buyers.

Indeed, the oil produced by Aramco in Saudi Arabia has one of the lowest carbon intensity ratings among major international producers, according to S&P Global Platts – and that’s thanks largely to its ease of access to reserves and low gas flaring during production.

“Those investment decisions take several years of capital investment and then construction, and finally, start up,” he said. “So we’re talking a five to seven year timeframe before a large global world scale project could be on the ground running.”

Hydrogen is seen as a key source of fuel for a sustainable energy future, as it emits no greenhouse gasses when burned. However, not all hydrogen is created equal and its adoption faces various challenges – including the logistics of transportation, the cost of production, and various regulatory hurdle.

According to the IEA most hydrogen is produced industrially from natural gas, which still generates significant carbon emissions. This is known as “grey” hydrogen. The cleanest and most expensive form is “green” hydrogen, which is generated by renewable energy sources that don’t produce carbon emissions at all.

Aramco is focusing on what’s known as “blue” hydrogen – a production method that uses natural gas, but one in which emissions are captured and stored or reused. Aramco believes demand for “blue” hydrogen will grow significantly in the coming decades, owing to its lower cost of production. The IEA estimates global hydrogen demand will reach 18 million barrels of oil equivalent by 2050.

“We want policymakers to actually recognize that this is a solution that needs that alignment and push going forward,” Al Khowaiter said.

And major market players are already calling significant investment opportunities in the hydrogen sphere. Bank of America predics that hydrogen will take 25% of all oil demand by 2050.

Representatives from automakers Hyundai and Toyota also joined the event to outline hydrogen’s role in the future of transportation, which is directly intertwined with Aramco’s oil business. More than 50% of oil that is produced globally goes into the transportation sector alone.

A number of countries have already outlined plans to decarbonize road transport, including the United States which is targeting 15 percent zero emissions vehicles by 2025.

China is targeting 20 percent new energy vehicles by 2025, while France and the United Kingdom expect to see no new internal combustion engine cars by 2040 and 2050 respectively.