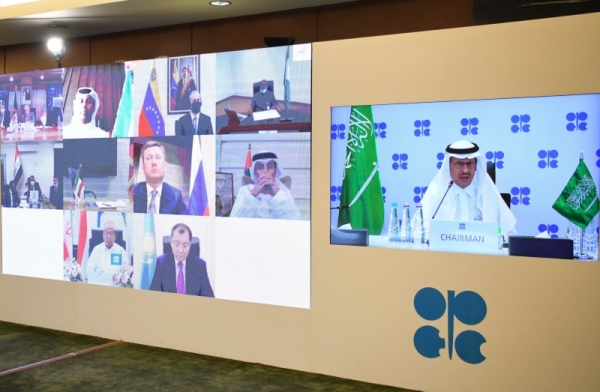 Prince Abdul Aziz and Co-Chair Alexander Novak, minister of energy of the Russian Federation, reviewed the compliance levels of the OPEC member countries with the Joint Technical Committee (JTC) stressing the ongoing positive contributions of the members that’ll allow for rebalancing of the global oil.

“Based on the average projections of various institutions, including OPEC, EIA and the IEA, it is estimated that the world will reach about 97% of pre-pandemic oil demand during the fourth quarter — which is a big recovery from the huge falls in April and May,” said Prince Abdulaziz prior to the start of the meeting.

OPEC welcomed the significant performance in overall conformity for participating OPEC and non-OPEC countries, which was recorded at 97% in July 2020, including Mexico as per the secondary sources.

It also requested other underperforming participating countries to submit their plans for implementation of the required compensation for the overproduced volumes to the OPEC Secretariat by the end of next week, Aug. 28, 2020.

The meeting observed that there are some signs of gradually improving market conditions, including the inventory build in July 2020 being reversed and the lessening of the gap between global oil demand and supply. Nevertheless, the pace of recovery appeared to be slower than anticipated with growing risks of a prolonged wave of COVID-19.

Rystad Energy’s Paola Rodriguez Masiu said, “One thing is for sure. You can’t call OPEC+ a pessimistic alliance. OPEC continues its optimistic view and key members see demand already nearing pre-pandemic levels in Q4. While OPEC+ seem to assume that the market will close the year almost balanced and draws will become the norm left and right, we see the market returning to a mini-glut.”

Masiu added, “Our liquids balances suggest moderate oversupply in the next three months as our base case scenario now includes a mild effect of a second wave of the pandemic. And demand just cannot recover as quickly when restrictions are in place. Even if industry resumes, transport, namely aviation and road fuels, cannot keep up oil consumption in such conditions.”

“One message is likely to be crystal clear though, and that is ‘no cheating is allowed’ for members that are eager to be undercompliant. As demand has not recovered as quickly as the alliance initially thought and hoped. The demand recovery is expected to slow down now, with oil demand hitting the ceiling at about 91.0 million bpd and not recovering further until winter,” Masiu said.

“Last but not least, don’t forget that shut-in production is returning from other producers outside the alliance. The US for example is bringing nearly all of its shut output back already by the end of August. Not a welcomed move by OPEC+, which is left alone in taking the responsibility of balancing the market and saving it from catastrophic oversupply. Its biggest producers would like to see more of their output available under the current — healthier — prices, but are left to carry the weight of balancing the market. — Agencies